What does Aaron mean?

[ 2 syll. aa-ron, aar-on ] The baby boy name Aaron is pronounced in English as AER-ahN or EHR-ahN †. Aaron is largely used in the English, German, Hebrew, and Polish languages, and its origin is Hebrew. The name is of the meaning enlightened; mountain of strength, high mountain, exalted. Aharon (Hebrew) is an original form of Aaron. The origin of the name is obscure; it could be Egyptian like the name Moses. It could also be of the Hebrew 'aharon'. Alternatively, from Hebrew folk origins, it could mean 'mountain of strength', 'high mountain' or 'exalted'.

In the Bible, Aaron was the older brother of Moses. Aaron was appointed by God to be Moses' spokesman, and became the first high priest of the Israelites. In Shakespeare's play Titus Andronicus (1590-1594), the name is borne by the evil Aaron the Moor. It is also known from Aaron's Rod, the nickname of the flower Verbascum thapsus, a plant with yellow flower clusters, in reference to the biblical account of the blossomming of Aaron's rod. The name was rarely used before the Reformation. In the 17th century, it was taken up by the Puritans, and has been somewhat more common among Jews than Christians. The name Aaren (English) is the female equivalent of Aaron.

Aaron is popular as a baby name for boys. The name's popularity jumped from the 1940s up to the 1980s. Its usage peaked in 1981 with 0.789% of baby boys being given the name Aaron. Its ranking then was #30. The baby name has since experienced a fall in popularity. In 2018, its usage was 0.309% and its ranking #60, but it was nonetheless the most popular among all boy names in its group. In 2018, Aaron was used 7 times more than the next ranked name, Ari. Aaron has predominantly been a baby boy name, though in the past century it has also been used for girls. In 1983, baby boys named Aaron outnumbered girls by 80 times. 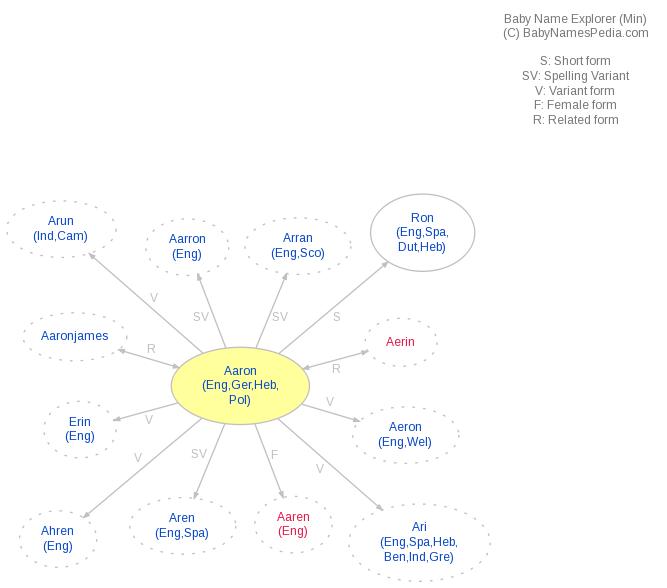