What does Abdiel mean?

[ 3 syll. ab-diel, abd-i-el ] The baby boy name Abdiel is pronounced AEBDiy-ehL or ah-BDIY-L †. Abdiel is of Hebrew origin, and it is used largely in the English, Hebrew, and Spanish languages. The name's meaning is 'servant of God'. It is a biblical name derived from ebed meaning 'servant' ; el 'God, powerful'. Avdiel (Hebrew) is an old form of Abdiel. In the Bible, Abdiel was a man of the Tribe of God.

Variants of Abdiel include Abdi (Arabic and Hungarian) and Avdiel (Hebrew).

Abdiel is fairly popular as a baby name for boys. The name's popularity has been rising since the 2000s; before that, it was of only sporadic use. At the modest peak of its usage in 2018, 0.023% of baby boys were given the name Abdiel. It ranked at #611 then. Out of all boy names in its group, Abdiel was the most widely used in 2018. 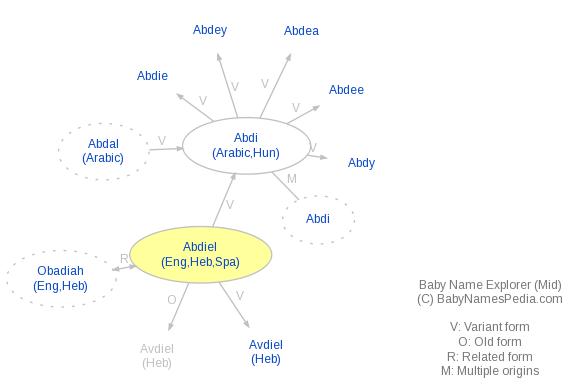