What does Abdul Awwal mean?

[ 4 syll. ab-du-law-wal, abd-ul aww-al ] The baby boy name Abdul Awwal is pronounced as AH-BDuwL-aa-WaoL †. Abdul Awwal is used predominantly in Arabic and its origin is also Arabic. Abdul Awwal's meaning is servant of the first.

Abdul Awwal is not widely used as a baby name for boys. It is not listed within the top 1000 names. 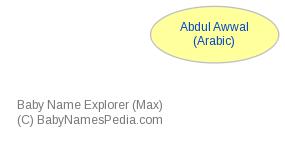