What does Abel mean?

Abel is used predominantly in the English, French, German, Portuguese, and Spanish languages, and it is derived from Hebrew origins. The origin of the name is obscure; it could be from Hevel (Hebrew), of the element 'hevel' (meaning breath, vapor) thus suggesting vanity or worthlessness, or else it could be of Assyrian roots. In the Bible, Abel was the second son of Adam and Eve, murdered in a fit of jealousy by his brother Cain.

The name was first used by English speakers in the Middle Ages. After the Reformation, it was adopted by the Puritans, who also used Nab as a pet form. Known as a pre-Christian martyr, Abel is invoked by Catholics as a saint in the litany for the dying. In literature, the name is borne by Abel Drugger, nicknamed Nab, in Ben Jonson's comedy The Alchemist (1610), and Abel Magwitch in Charles Dickens' novel Great Expectations (1860-61). The name Abelia (French) is the female version of Abel.

Abel's language of origin is Assyrian. It is a biblical name derived from the word aplu meaning 'son'. The generic name has been used in the Old Testament of the Bible.

In addition, Abel is a contraction of the name Abelard (English). 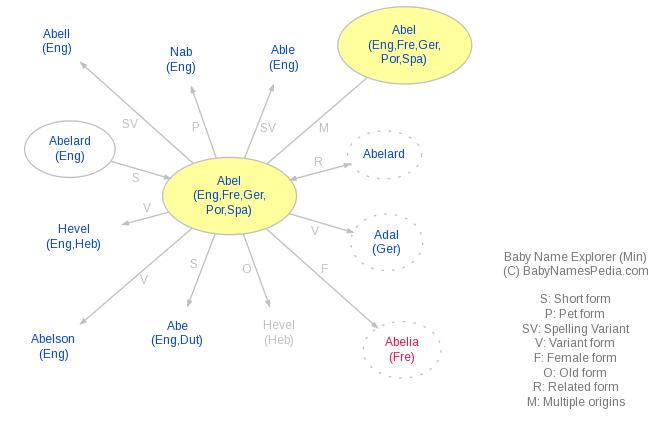