What does Abigail mean?

[ 3 syll. a-bi-gai(l), ab-iga-il ] The baby girl name Abigail is pronounced as AEB-ih-GeyL (English) or AA-Biy-GayL (German) †. Abigail is used predominantly in English, German, and Hebrew, and its origin is Hebrew. Abigail's meaning is my father rejoices, joy of my father. A biblical name, it is derived from the elements 'av' which means father ; 'giyl' joy, rejoice. Abigajil (Hebrew), Avigayil (Hebrew), and Awigajil (Hebrew) are old forms of the name. In the Bible, Abigail was the intelligent and beautiful wife of Nabal of Carmel, who later became King David's third wife. The name was also borne by King David's sister, and by the mother of Absalom's captain Amasa. As a result of the appearances in the Bible, the name was widely adopted by the Puritans in the 17th century.

Abigail was also commonly used as a name for ladies' maids in literature, for instance in Beaumont and Fletcher's play The Scornful Ladie (1616). This use is congruent with the biblical Abigail, who described herself to David in the Bible as 'thy servant'. As a result, the name was also used as a slang term for a servant during the 18th century and therefore lost some of its popularity. Its decline was also due to Abigail Masham (1680-1734), the unpopular lady-in-waiting to Queen Anne. In literature, notable bearers include the ill-fated daughter of Barabas in The Jew of Malta (1589 or 1590) and the manipulative Abigail Williams in Arthur Miller's play The Crucible (1950s). The name is also taken as the Anglicized form of Gobnait in Ireland.

What are the Variant Forms of Abigail?

Abigail is very popular as a baby name for girls. The name's popularity increased from the 1940s up to the 2000s. At the peak of its usage in 2003, 0.795% of baby girls were named Abigail. It ranked at #6 then. The baby name has since experienced a loss in popularity. In 2018, its usage was 0.531% and its ranking #11, but it was nevertheless the most popular out of all girl names in its group. In 2018, 15 times more girls were named Abigail than the subsequent ranked name, Abby. 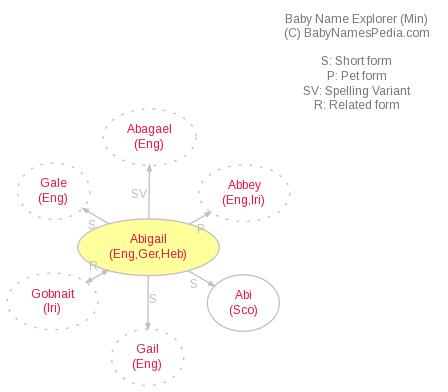