What does Abraham mean?

[ 3 syll. a-bra-ham, ab-rah-am ] The baby boy name Abraham is pronounced in English as EY-BRah-HHaeM †. Abraham is used chiefly in the Dutch, English, German, and Hebrew languages, and its origin is Hebrew. The name's meaning is father of a multitude. A biblical name, it is derived from the elements 'av' meaning father ; 'hamon' multitude. Abrahamus (Latin) and Avraham (Hebrew) are original forms of Abraham. In the Bible, the patriarch Abram's name was changed to Abraham when he entered into a covenant with God that his descendants would possess the land of Canaan. The Bible explained the name Abraham as 'father of a multitude (of nations)'. Among Muslims, Ibrahim is regarded as the founder of the Arabs, and the name is often taken to be from 'abu' meaning 'father' and 'rahim' meaning 'kind'.

The name Abraham was adopted by the 17th-century Puritans, and it has been particularly popular among Jews. The name was also borne by various saints of the Eastern Roman Empire. Its current adoption has been widely influenced by the US President Abraham Lincoln (1809-1865), the Civil War president nicknamed 'Honest Abe'. Another short form of the name is well-known from Bram Stoker (1847-1912), who created Count Dracula.

Abraham is a variant of the name Avraham (Hebrew and English) in the English language.

The name Abra (English, Indian, and Ewe) is the female form of Abraham.

Abraham is a widely used name; it has 46 variants that are used in English and other languages. Variants used in English include Aberham, Abey, Abhiram, Abrahame, Abraheem, Abrahem, Abrahim, Abrahm, Abrami, Abramio, Abrams, Abrian, Abriel, Aperahama, Avra, and Ibrahim (used in Arabic, Spanish, and Turkish too). Other English variants include the contractions Abe (used in Dutch too), Abram (used in Russian, and Yiddish too), Abran (used in Spanish too), Brahm, Bram (used in Dutch too), and Ham, and the diminutive forms Abi and Abie.

Abraham is popular as a baby name for boys, and it is also viewed as fairly trendy. The name's popularity has been growing since the 1950s. Its usage peaked modestly in 2016 with 0.127% of baby boys being given the name Abraham. It ranked at #158 then. In 2018, its usage was 0.121% and its ranking #164, and it was the most popular among all boy names in its group. In 2018, Abraham was thrice as popular as the next most popular name, Ibrahim. 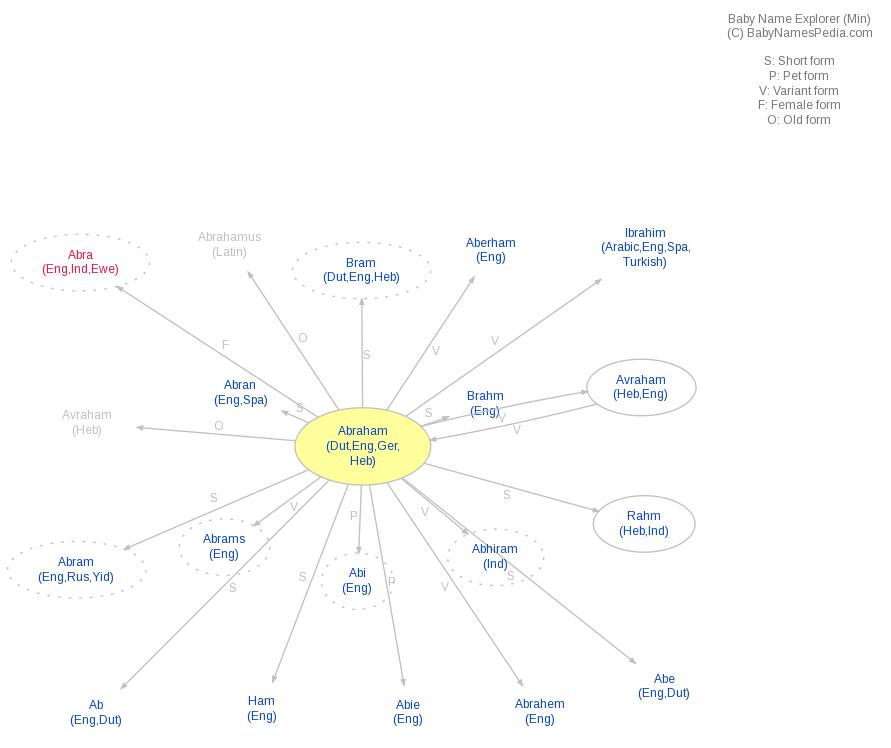