What does Abram mean?

[ 2 syll. a-bram, ab-r-am ] The baby boy name Abram is pronounced as AHBRAEM †. Abram is used predominantly in English, Russian, and Yiddish, and its origin is Hebrew. Abram's meaning is high father. A biblical name, it is derived from the elements 'av' which means father ; 'ruwm' to uplift, to lift up. Abiram (Hebrew) and Avram (Hebrew) are original forms of the name. Abram was possibly an independent name of distinct Hebrew origins. In the Bible, Abram's name was changed to Abraham by God when it was revealed that he would be the father of the Hebrew nation. The name could have been used as an English short form of Abraham since the Middle Ages.

Abram is a shortening (English, Russian, and Yiddish) of the name Abraham (Dutch, English, German, and Hebrew).

Abram is a fairly popular baby name for boys. The name's popularity has been growing since the 1990s. Its usage peaked modestly in 2016 with 0.043% of baby boys being named Abram. It ranked at #379 then. In 2018, its usage was 0.036% and its ranking #433. Among the group of boy names directly related to Abram, Abraham was the most regularly used. In 2018, the name was thrice as popular as Abram. 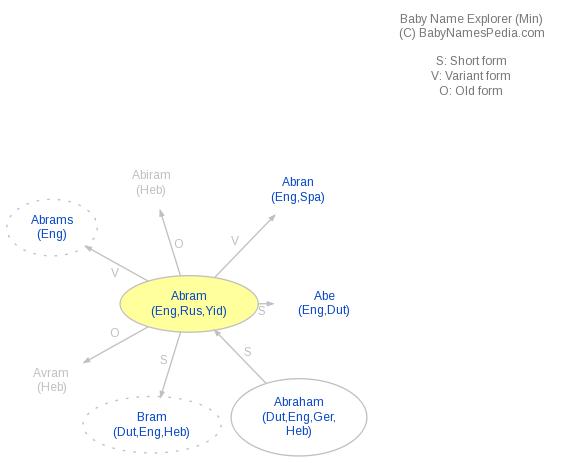