What does Acadia mean?

[ 4 syll. a-ca-dia, ac-ad-ia ] The baby girl name Acadia is pronounced as ah-KEY-Diy-ah- †. Acadia is an English name of Algonquian-Wakashan origin. Acadia's meaning is place of plenty. Its meaning is from the element 'acada'. The first name is derived from the place name Acadia. The Acadians are descendants of 17th-century French settlers who moved to Acadia in the Canadian maritime provinces of Nova Scotia, New Brunswick, and Prince Edward Island, and the American state of Maine. In the mid-18th century, the British deported many Acadians from the maritime provinces. Many of them settled in Louisiana and came to be known as Cajuns, while others left for France. When the British conquered New France, the French colony Acadia was renamed Nova Scotia.

Acadia is seldom used as a baby name for girls. It is not in the top 1000 names. 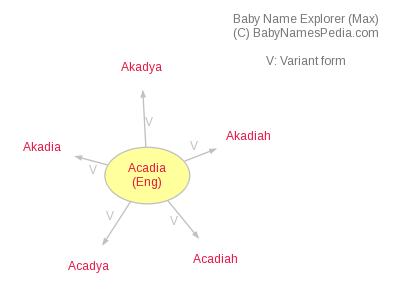