What does Achilles mean?

[ 3 syll. ac-hil-les, ach-ill-es ] The baby boy name Achilles is pronounced in English as ah-KIHL-iyZ †. Achilles is an English, German, and Latinized name of Old Greek origin. The meaning of Achilles is pain; lipless. Original forms of the name include Achilleus (Old Greek), Akhilleus (Old Greek), and Archilleus (Old Greek). The name is of disputed origin; it could be derived from the Greek 'achos', or else from 'a' and 'kheile' and thus meaning 'lipless' - possibly referring to the legend that he was never suckled. It could also have been named after the River Akheloös. In Greek mythology, Achilles was the son of the sea nymph Thetis and the mortal Peleus, the king of the Myrmidons. In the Iliad, Homer described him as the greatest of warriors who killed Hector and led the Greek army in the Trojan war. In other legends, Achilles was invulnerable except for his heel, hence the term 'Achilles' heel' for a minor weakness in something otherwise impenetrable. The name was borne by various early saints. It has been more widely used in continental Europe, especially in Germany and France, rather than in England. In Latin, the feminine form of Achilles is Achillea.

Achilles is somewhat popular as a baby boy name. The name has been growing in popularity since the 2010s; prior to that, it was of very modest use only. Its usage peaked recently in 2018 with 0.013% of baby boys being named Achilles. It was #857 in rank then. Among all boy names in its family, Achilles was the most popular in 2018. 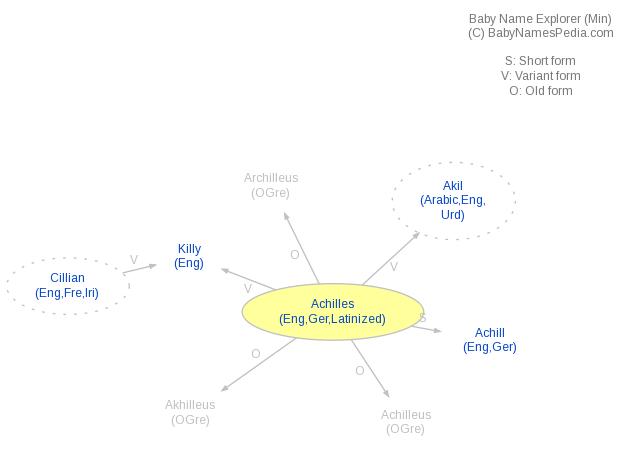