What does Ada mean?

Ada has its origins in the Germanic language. It is used largely in the African, English, German, Hebrew, Hungarian, Polish, and Romanian languages. The name is of obscure origin. It could be from the short form of various Germanic compound names starting with adal (meaning 'noble, honorable'), or else it could be Hebrew in origin. The name was borne in the 4th century by the sister of Mausolus, the builder of the first mausoleum, and by a 7th-century abbess in France. The name was introduced from Germany to English speakers in the late 18th century. It later became popular in the 19th century, during which Lord Byron gave the name to his daughter Ada, Countess of Lovelace (1815-1852), a prominent mathematician and patron of Charles Babbage the inventor of the early mechanical computer. The computer language Ada was later named after her.

Ada's language of origin is Hebrew, and it is predominantly used in English, German, Hungarian, Polish, and Romanian. Biblical name: Here, it means 'ornament, brightness'. Adah (Hebrew) is an original form of the name. In the Old Testament of the Bible, a number of women were named Adah, with various meanings such as 'ornament' and 'brightness'.

A variant transcription of Ada is Adabelle (English).

Ada is also a diminutive of the English and Italian Adelaide in the African, English, German, Hebrew, Hungarian, Polish, and Romanian languages.

Ada is also a variant form of the English and Hebrew Adiel.

Ada is a popular baby name for girls, and it is also perceived to be trendy. Its usage peaked modestly in 1901 with 0.359% of baby girls being named Ada. Its ranking then was #66. The baby name has since experienced a steep decline in popularity. In 2018, it ranked at #251 with a usage of 0.070%, enjoying a minor resurgence in the recent decade. Among all girl names in its group, Ada was the most popular. Ada was more regularly used than the next most popular name, Adelaide, by 16% in 2018. 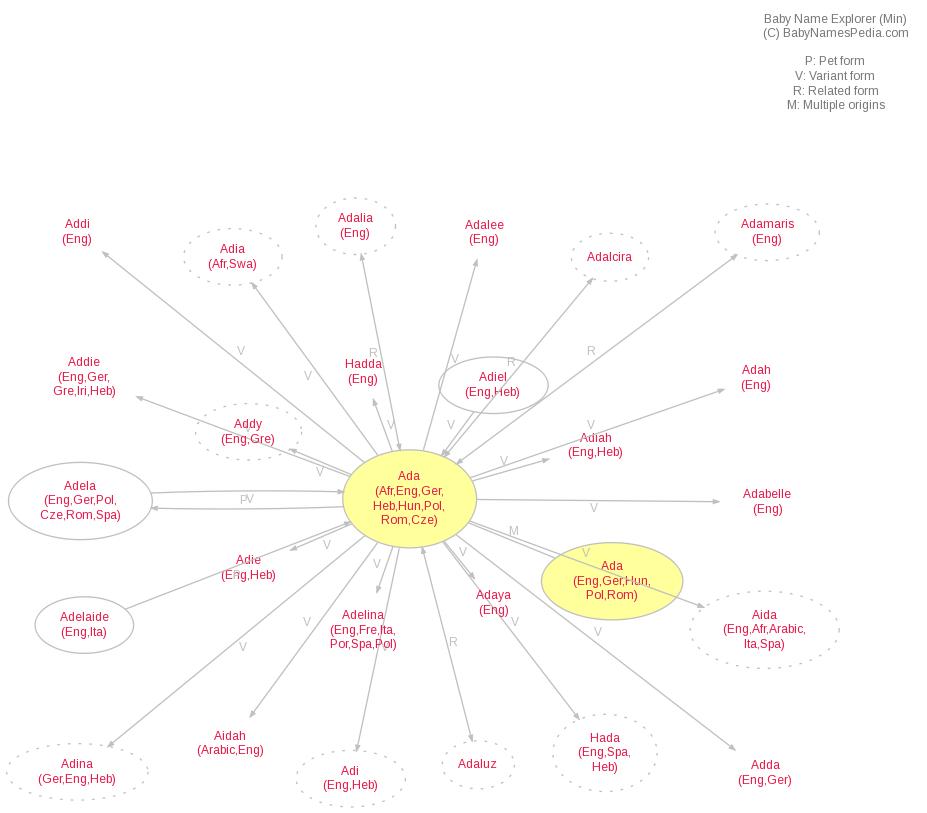