What does Adalberto mean?

[ 3 syll. a-dal-ber-to, ad-albe-rto ] The baby boy name Adalberto is pronounced as aa-D-LBEHR-Tow- †. Adalberto's language of origin is Germanic. It is predominantly used in Spanish, Italian, and Portuguese.

Adalberto is a derivative (Spanish) of the Dutch, German, and Polish Adalbert.

Adalberto is also a derivative (Italian, Portuguese, and Spanish) of Albert.

Adalberto is also a derivative (Portuguese and Spanish) of the Italian, Portuguese, Spanish, and English Alberto.

Adalberto is an unusual baby boy name. Its usage peaked modestly in 1981 with 0.005% of baby boys being named Adalberto. It had a ranking of #918 then. The baby name has experienced a decline in popularity since then, and is currently used only on an infrequent scale. In 2018, among the family of boy names directly related to Adalberto, Albert was the most widely used.

Baby names that sound like Adalberto include Adalbert (Dutch, German, and Polish), Adelbert (Dutch, English, and German), and Adelfried. 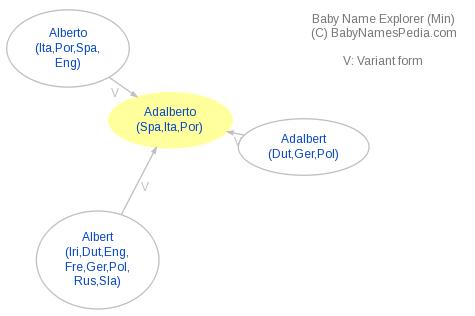