What does Adela mean?

[ 3 syll. a-de-la, ad-ela ] The baby girl name Adela is pronounced ah-DEHL-ah (English) or aa-DEH-Laa (Polish) †. Adela has its origins in the Germanic language. It is used largely in English, German, Polish, Czech, Romanian, and Spanish. It is derived from the word adal which is of the meaning 'noble, honorable'. Adela is sometimes used as the short form of names beginning with 'Adel-', such as 'Adelheid'. These names were often bestowed by early Frankish nobility to emphasize their baby daughters' lineage and marriageability. The distinct name was introduced to England by the Normans in the 11th century. Adela was the name of the youngest daughter of William the Conqueror, while the mother of William the Conqueror was named Adelicia or Adeliza. The name was also borne by Saint Adela, a 7th-century Frankish princess who founded a monastery in France.

Adela is a form (English, German, and Polish) of Ada.

Adela is also a contracted form (Czech, English, Polish, and Spanish) of the English and Italian Adelaide.

Adela is the feminine version of the German Adal.

What are the Variant Forms of Adela?

Adela is rare as a baby girl name. At the modest peak of its usage in 1911, 0.014% of baby girls were named Adela. It was #522 in rank then. The baby name has substantially slipped in popularity since then, and is currently used only on a very light scale. In 2018, out of the family of girl names directly related to Adela, Adeline was the most regularly used. 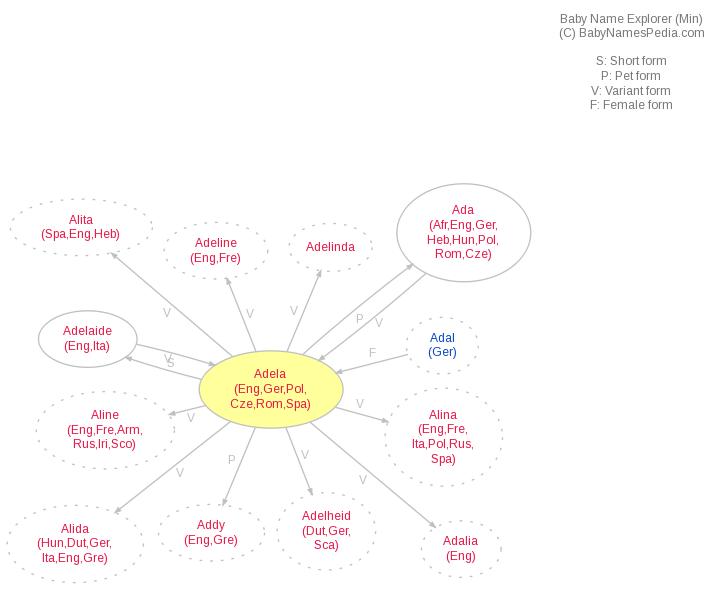