What does Adelaide mean?

[ 3 syll. a-de-lai-de, ad-ela-ide ] The baby girl name Adelaide is pronounced as AE-D-eh-LAED- †. Adelaide has its origins in the Germanic language. It is used largely in English and Italian. The name Adelaide means 'of a noble kind'. It is a two-element name from adal and heit which are of the meanings 'noble, honorable' and 'kind, sort, type' respectively. The name is derived ultimately from Adalheidis (Germanic) via the short form Adelais (Old French). It was borne by the beautiful and popular Saint Adelaide (931-1037), who married Otto the Great and became the Empress of the Holy Roman Empire. The name was later revived in the 19th century by King William IV's popular German-born wife Queen Adelaide (1792-1849), after whom the capital of South Australia was named in 1836.

Adelaide is a form of the English, German, Polish, Czech, Romanian, and Spanish Adela.

Adelaide is also an English and Italian form of the Dutch, German, and Scandinavian Adelheid.

What are the Variant Forms of Adelaide?

Adelaide is popular as a baby girl name, and it is also regarded as rather trendy. The name has been growing in popularity since the 2000s. Its usage peaked modestly in 2016 with 0.064% of baby girls being named Adelaide. It had a ranking of #258 then. In 2018, it ranked at #298 with a usage of 0.060%. Among the family of girl names directly related to Adelaide, Alice was the most frequently used. The name was thrice as popular as Adelaide in 2018. 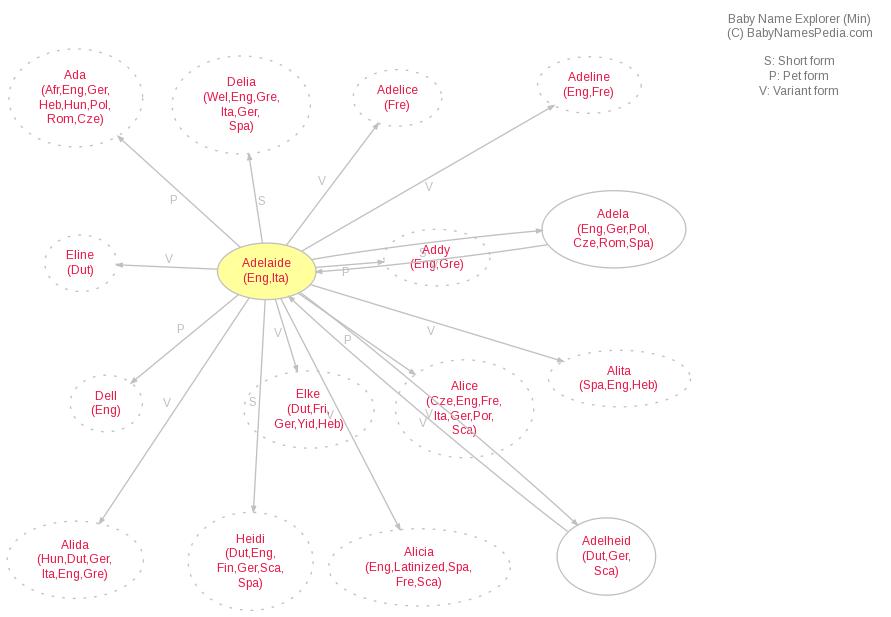