What does Adelina mean?

[ 4 syll. a-de-li-na, ad-el-ina ] The baby girl name Adelina is pronounced aa-Deh-LIY-Naa (Italian) or aa-DHeh-LIY-Naa (Spanish) †. Adelina has its origins in the Germanic and Latin languages, and it is used largely in English, French, Italian, Portuguese, Spanish, and Polish.

Adelina is a variant of Ada in the English language.

Adelina is also a variant of Adela (English, German, Polish, Czech, Romanian, and Spanish) in the English, French, Italian, Portuguese, and Spanish languages.

Adelina is also a variant of Adeline (English and French) in the Polish and Spanish languages.

Adelina is also a variant of Alida (Hungarian, Dutch, German, Italian, English, and Greek) in the Spanish language.

Alina (English and French contracted form) is a variant of the name.

Adelina is fairly popular as a baby name for girls, and it is also regarded as fairly trendy. The name's popularity has been rising since the 2000s. At the recent peak of its usage in 2017, 0.033% of baby girls were named Adelina. Its ranking then was #505. In 2018, it ranked at #543 with a usage of 0.031%. Out of the group of girl names directly related to Adelina, Adeline was the most widely used. Its use outnumbered Adelina's by 6 times in 2018. 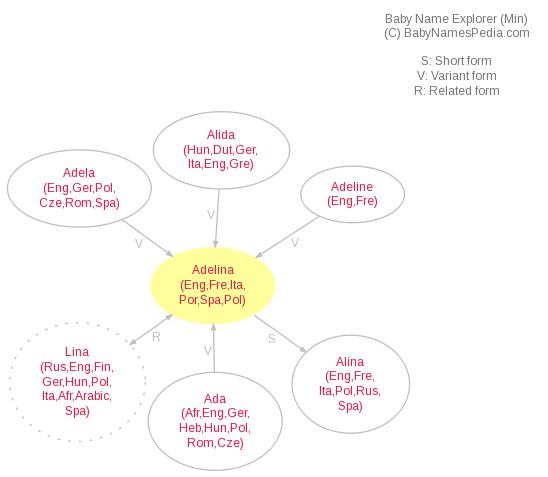