What does Adella mean?

[ 3 syll. a-del-la, ad-e-lla ] The baby girl name Adella is pronounced as aa-DEHL-aa- †. Adella is used mostly in the English language and its language of origin is Germanic.

Adella is a derivative (English) of the English, German, Polish, Czech, Romanian, and Spanish name Adela.

Adella is also a diminutive (English) of the English and Italian name Adelaide.

Adella is also a derivative of the English and French name Adeline.

Adella is uncommon as a baby girl name. At the modest height of its usage in 1908, 0.013% of baby girls were given the name Adella. It had a ranking of #557 then. The baby name has substantially fallen in popularity since then, and is currently used on an infrequent scale. In 2018, within the family of girl names directly linked to Adella, Adeline was the most popular. 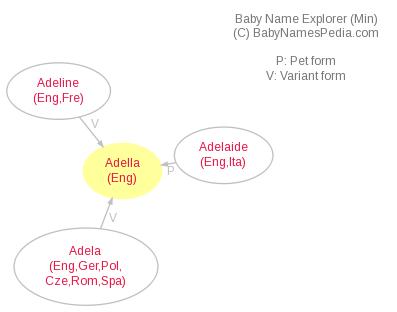