What does Adia mean?

[ 3 syll. a-dia, ad-ia ] The baby girl name Adia is pronounced aa-DIY-aa- or AHDiy-aa- †. Adia's language of origin is Germanic, African-Swahili, and East Indian. It is predominantly used in African and Swahili. From African-Swahili roots, its meaning is 'gift from god'. The name has been made known by the Sarah McLachlan song Adia (1997).

In addition, Adia is a variant form of Ada.

Adia is also a variant form of the Indian Adya.

Variant forms of Adia include the names Addia, Adea, Adeah, Adiah, and Adya.

Adia is not often used as a baby girl name. It is not in the top 1000 names. In 2018, within the family of girl names directly related to Adia, Ada was the most frequently used. 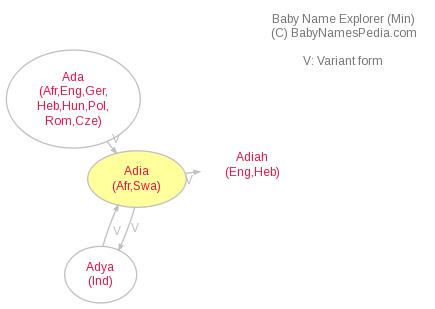