What does Adina mean?

[ 3 syll. a-di-na, ad-ina ] The baby girl name Adina is also used as a boy name, though the use for girls is far more popular. It is pronounced as aa-DIY-Naa- †. Adina's language of origin is Germanic and Hebrew. It is predominantly used in German, English, and Hebrew. Hebrew origin, English and Hebrew use: It is derived from the word adin which is of the meaning 'slender, delicate'. Adina has been adopted as a feminine name due to the '-a' suffix. It appeared in the Donizetti opera L'elisir d'amore (The Elixir of Love, 1831) as the name of a beautiful landowner. It was also the title of a 19th-century short story written by the realist author Henry James. See Adina for more information.

In addition, Adina is a form of Ada in the German language.

Adina has 17 forms that are used in English and foreign languages. English forms of the name include Adene (used in Hebrew as well), Adiana, Adiena, Adin, Adinah, Adinam, Adinna, Adyna, Adynah, Aideen, Aidena, and Dena. Other English forms include the diminutive Adeen, and the spelling variants Adeana, Adeena, and Adena (used in Hebrew as well). The Hebrew Adine is a form of Adina that is used in foreign languages.

Adina is an uncommon baby girl name. It is not in the top 1000 names. In 2018, among the family of girl names directly related to Adina, Ada was the most popular. 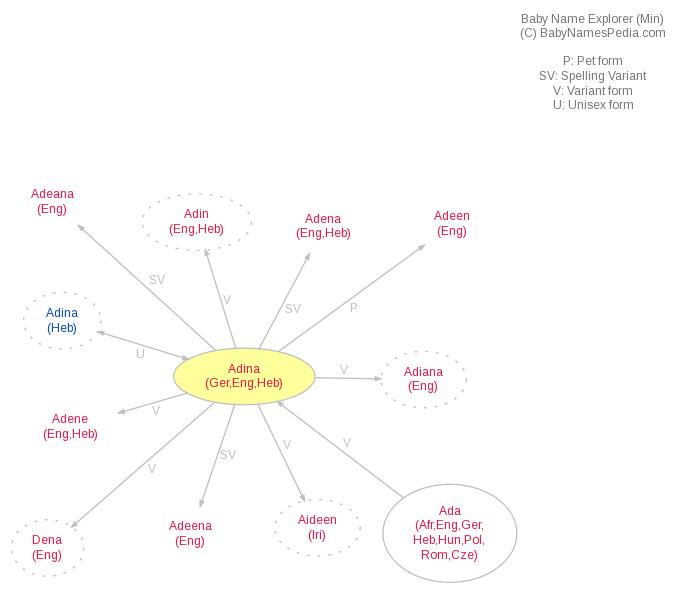