What does Adrian mean?

[ 3 syll. a-drian, ad-ri-an ] The baby boy name Adrian is sometimes used as a girl name. Its pronunciation is EY-DRiy-ahN (English), AA-DRiy-aaN (German), AAD-RYaaN (Polish), or aa-DRiy-AAN (Russian) †. Adrian is used chiefly in the English, German, Polish, Romanian, and Russian languages, and it is derived from Latin origins. The name is of the meaning man from Hadria; dark one. The name is derived from Hadrian, itself from Hadrianus (Latin) meaning 'man from Hadria'. Hadria is a town in northern Italy named after the Adriatic Sea. The sea was probably named for the dark-colored sand on its beaches, from the Latin 'ater'. Today the city Atri is in the Italian province of Teramo. Adrian was the cognomen of the Roman emperor Publius Aelius Hadrianus, who came from this town; during his reign (117-138) Hadrian's Wall was built across northern England.

To the Romans, Adrian and Hadrian were equivalent names, but the former became more popular through association with a prominent Roman officer who converted to Christianity and was martyred in 304, as well as Saint Adrian of Canterbury (-710), a native from Africa who twice refused the post of Archbishop of Canterbury. In tribute to the latter, the name was adopted by Nicholas Breakspeare (Adrian IV) (1100-1159), the first and only British pope. In literature, the name has appeared in the Shakespearean plays The Tragedy of Coriolanus (1608) and The Tempest (1611). See Adrian for more information. The name Adriana (Czech, English, German, Italian, Polish, Portuguese, Romanian, Slavic, and Spanish) is the female form of Adrian.

The name Adrian is used to a great extent; it has 56 variants that are used in English and other languages. Variants used in English include Adarian, Adiran, Adrain, Adrean, Adreean, Adreeyan, Adreian, Adreyan, Adriane, Adriann, Adrianne, Adriano (used in Italian and Spanish as well), Adriean, Adrin, Adrino, Adrion, Adron, Adryan, Adryn, Aidrian, Akiliano (used in Hawaiian as well), Aryan, Aydrean, Aydreean, Aydrian, Aydrien, Dadrian, Hadrian (used in German and Scandinavian as well), Xadrian, and Zadrian. The short form Ade, the pet forms Addie and Adie, and the variant spelling Edrian are other English forms.

Adrian is popular as a baby name for boys. The name's popularity rose from the 1940s up to the 2000s. At the modest peak of its usage in 2008, 0.365% of baby boys were given the name Adrian. Its ranking then was #56. The baby name has since fallen in popularity. In 2018, its usage was 0.300% and its ranking #62, but it was nonetheless the most popular out of all boy names in its group. In 2018, Adrian was more widely used than the next most popular name, Aryan, by 19 times. Adrian has predominantly been a baby boy name in the past century. In 2000, Adrian as a baby boy name outnumbered its use as a girl name by 24 times. 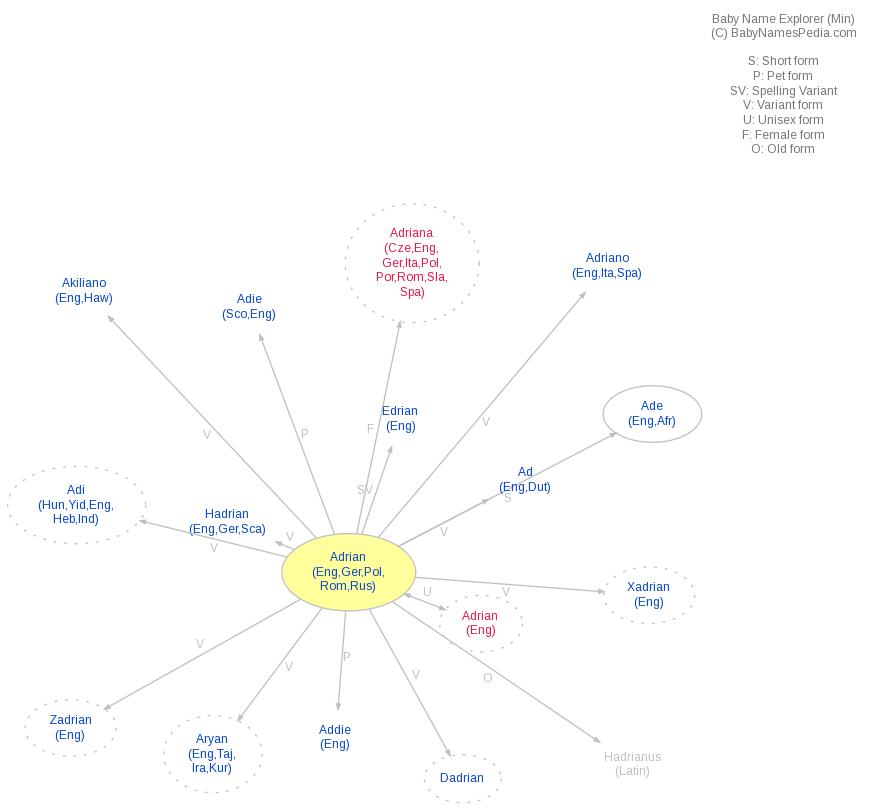