What does Adrianna mean?

[ 4 syll. a-drian-na, ad-ria-nna ] The baby girl name Adrianna is pronounced in English as eyD-Riy-AEN-ah or in Polish as aaD-RYAAN-Naa †. Adrianna has its origins in the Latin language. It is used largely in the English and Polish languages.

Adrianna is a variant transcription of Adria (German and English).

Adrianna is also an English and Polish variant transcription of Adriana.

Adrianna is rather popular as a baby girl name. The name's popularity jumped from the 1970s up to the 1990s; before that, it was of only very modest use. Its usage peaked in 1997 with 0.105% of baby girls being given the name Adrianna. It was #156 in rank then. The baby name has experienced a decline in popularity since then. In 2018, it ranked at #414 with a usage of 0.040%. Among the family of girl names directly linked to Adrianna, Adriana was the most widely used. It was 82% more popular than Adrianna in 2018. 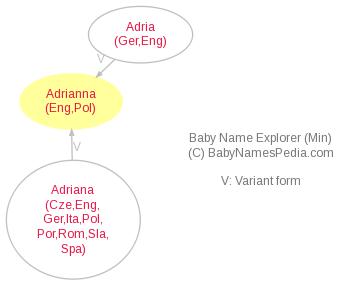