What does Africa mean?

[ 3 syll. a-fri-ca, af-r-ica ] The baby girl name Africa is pronounced AHF-Rih-Kaa- †. Africa is of Celtic and English origin. It is used mainly in English. From English roots, its meaning is 'woman from Africa'. It is from Africa which means 'land of the Afri' ; aphra 'dust'. The first name is derived from the continent name, itself of Latin origin from the name of the Afri tribe who dwelled in North Africa, near Carthage. The word Afri is ultimately from the Semitic aphra. The baby name has sometimes been bestowed by African American parents to imply pride in their heritage.

Africa is a variant form of the Irish Afric in the English language.

Africa is a widely used name; it has 25 variant forms that are used in English and foreign languages. English variant forms of the name include Affie, Affreeca, Affricah, Affrika, Affrikah, Affryka, Afreeca, Afric, Africah, African, Africaya, Africia, Africiana, Afrikah, Afrycah, Afrycka, Afryka, Afrykah, Aifric, Aphria, Apirka, and Rica. Other English forms include the spelling variants Affrica and Afrika (used in Irish as well). The Spanish África is a variant form of Africa that is used in foreign languages.

See also the related forms, the Scottish Oighrig and the Arabic and English Aphra.

Africa is not commonly used as a baby girl name. It is not in the top 1000 names. 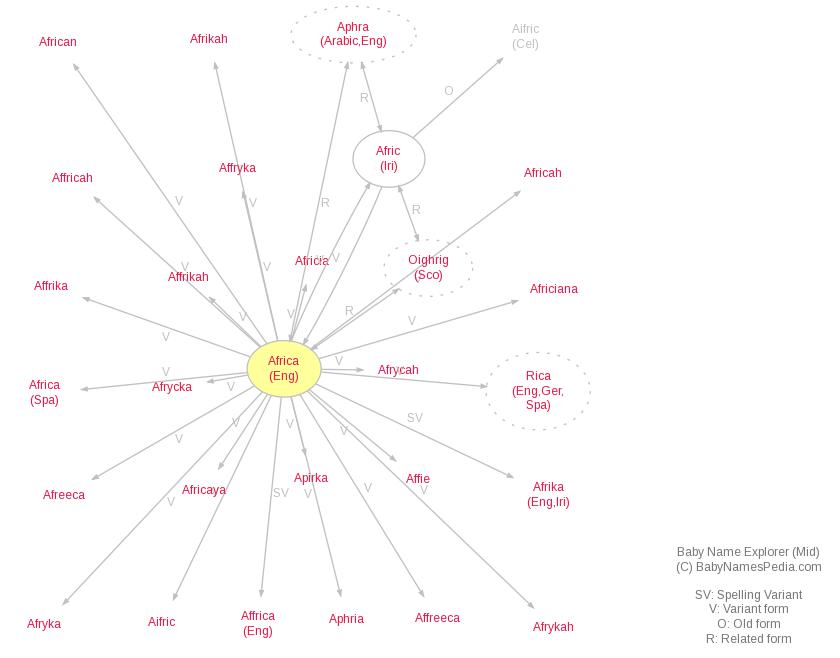