What does Agatha mean?

[ 3 syll. a-gat-ha, ag-a-tha ] The baby girl name Agatha is pronounced AEG-ah-THah in English †. Agatha is of Old Greek origin. It is used mainly in English, German, and Italian. It is derived from the word agathos with the meaning 'kind, good'. An older form of the name is Agathon (Old Greek). The name was borne by a 3rd-century virgin martyr, known as the patron saint of bell-founders. She was supposed to have suffered the torture of having her breasts cut off, and subsequent paintings depicted her holding them on a platter, thereby associating her with bells due to the similarity in shape. Other pictures depicted loaves of bread on the platter, thereby leading to the custom of blessing bread on her feast day. The name was introduced to English speakers by Normans in the 11th century, and it was used by William the Conqueror for one of his daughters. It was popular in the Middle Ages, often appearing as the Latinized form Agacia. The name dipped in popularity soon after, but was revived in the 19th century along with other medieval names. Agatha is the feminine equivalent of the English Agatho.

Agatha is uncommon as a baby girl name. At the modest height of its usage in 1913, 0.023% of baby girls were named Agatha. It had a ranking of #392 then. The baby name has seen a marked drop in frequency since then, and is used only on a very light scale now. Within all girl names in its family, Agatha was nevertheless the most frequently used in 2018. 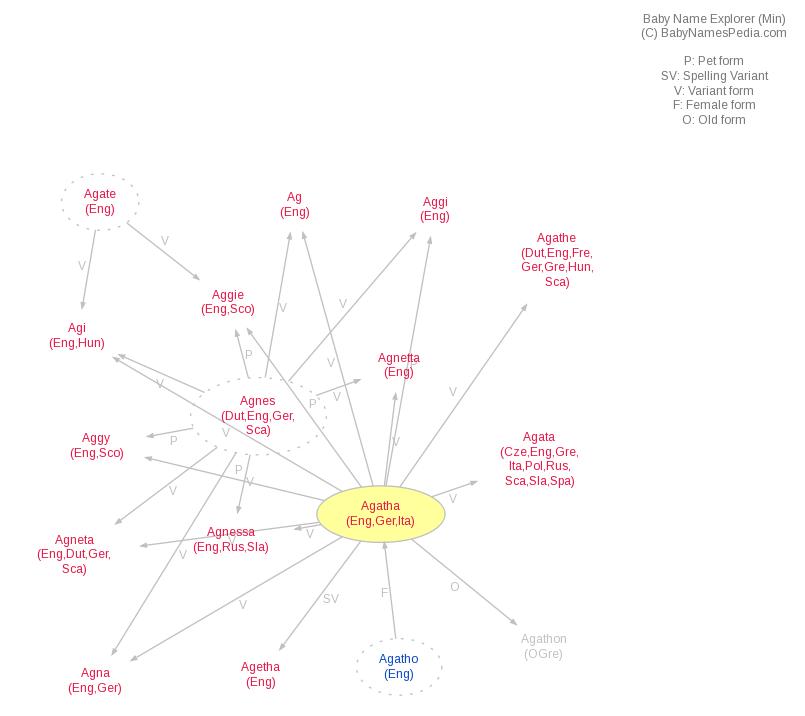