What does Agnes mean?

[ 2 syll. a-gnes, ag-n-es ] The baby girl name Agnes is pronounced AEG-NahS (English) or AAK-NahS (Dutch) †. Agnes is of Old Greek and Celtic origin. It is used mainly in the Dutch, English, German, and Scandinavian languages. Old Greek origin: It is derived from hagnos meaning 'pure, chaste' ; agnus 'lamb'. The name was originally the Latinized form of Hagne (Old Greek). However, the similarity in sound led it to be associated with the Latin agnus, and the resulting Christian connotations subsequently boosted the name's popularity. Saint Agnes was a 4th-century Roman virgin martyred in persecutions by the emperor Diocletian. She became a very popular saint in the Middle Ages and contributed to widespread adoption of the name; in art she has often been depicted with a lamb by her side.

The medieval vernacular forms Annis and Annes reflected the silent 'g' in the pronunciation of Agnes then. Annis gave rise to the surname, while Annes contributed to the name Nancy via the form Nance. The name Agnes declined in use after the Reformation, as it does not appear in the Bible. It was strongly revived under the Victorians, especially in 19th-century Scotland. In literature, the name has appeared in the Anne Bronte novel Agnes Grey (1847). It was later adopted as an Anglicized form of Úna in Ireland as both were associated with 'lamb'.

In addition, Agnes is a variation (English) of Úna (Irish and Scottish).

What are the Variant Forms of Agnes?

Agnes is rare as a baby girl name. In 1900, 0.602% of baby girls were given the name Agnes. It was #41 in rank then. The baby name has fallen out of favor since then, and is currently of only sporadic use. Out of all girl names in its family, Agnes was nonetheless the most popular in 2018. Agnes has primarily been a girl name, although in the last century it has also been used for boys. In 1910, 83 times as many girls than boys were given the name Agnes. 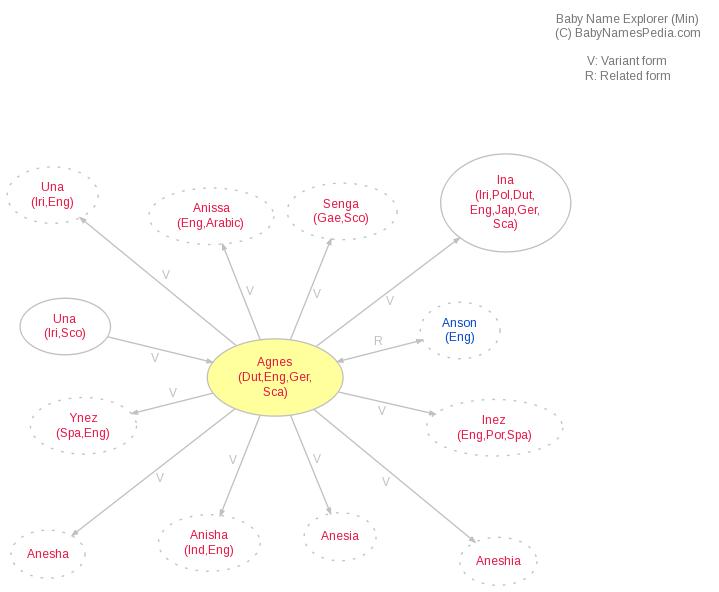