What does Aida mean?

Aida's language of origin is Old French, and it is predominantly used in African, Arabic, English, Italian, and Spanish. Aida is of the meaning 'helpful'. It is derived from the element aidier with the meaning 'to help'. The name is of obscure origin; it could also be of Arabic roots. It is known from the heroic Ethiopian princess in Giuseppe Verdi's opera Aida (1871).

Aida is used chiefly in Arabic, English, Italian, and Spanish. Its origin is Arabic. The meaning here is returning, visitor. It is derived from the word 'ada' with the meaning to return. An invented name.

In addition, Aida is a derivative (English) of Ada.

Aida is also a derivative (Italian) of Ida.

Aida is rare as a baby girl name. At the modest peak of its usage in 1973, 0.011% of baby girls were named Aida. It had a ranking of #767 then. The baby name has substantially dropped in popularity since then, and is today of very light use. In 2018, out of the family of girl names directly related to Aida, Ada was the most popular. 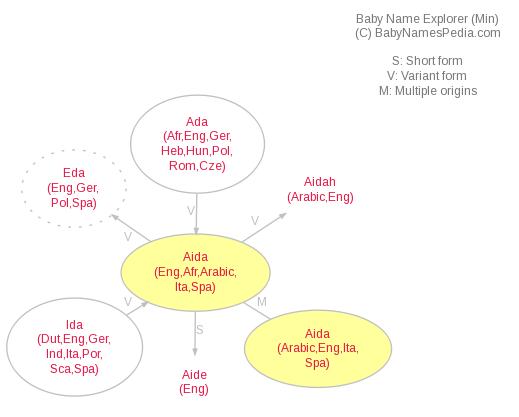