What does Aidan mean?

[ 2 syll. ai-dan, aid-an ] The baby boy name Aidan is also used as a girl name, but the use for boys is much more common. It is pronounced as EY-DahN †. Aidan is used chiefly in the English, Gaelic, Irish, and Scottish languages, and its origin is Celtic. The name's meaning is little fire. It is derived from the element 'aed' meaning fire. The name is Anglicized from the Gaelic Aodán, itself a diminutive of Aodh with the suffix '-án'. It was borne by several early Irish saints, including Saint Aidan of Lindisfarne (-651), a key contributor in the conversion of Christians in Northumbria; due to his fame, the name has long been used England, Scotland, and Ireland. In recent times, various forms of the baby name have been adopted by parents to imply pride in their Irish roots, as well as for the currently very popular '-an' or '-en' ending syllables.

Aidan is a variant of the name Aodh (Irish and Scottish) in the English and Gaelic languages.

The name Eithne (Irish and Scottish) is the female form of Aidan.

Aidan has 26 variants that are used in English and other languages. Variants used in English include Adan, Aden, Aedann, Aeden, Aedenn, Aedin, Aedyn, Aidann, Aidano, Aidenn, Aideyn, Aideynn, Aidin, Aydann, Aydenn, Edan (also used in Irish and Scottish), and Zayden. Other English forms include the short form Aid, and the variant spellings Aiden, Aidyn, Aydan, Ayden, and Aydin. A variant of Aidan in other languages is Aeddan (Welsh). Specific foreign forms include the diminutive form Adie (Scottish), and the variant spelling Aedan (Gaelic).

Aidan is a popular baby name for boys. The name's popularity rose from the 1980s up to the 2000s; before that, it was of very light use only. Its usage peaked modestly in 2003 with 0.480% of baby boys being given the name Aidan. It ranked at #39 then. The baby name has since experienced a fall in popularity. In 2018, its usage was 0.081% and its ranking #242. Among the group of boy names directly linked to Aidan, Aiden was the most frequently used. In 2018, it was used 6 times more than Aidan. In the past century Aidan has mostly been a baby boy name. 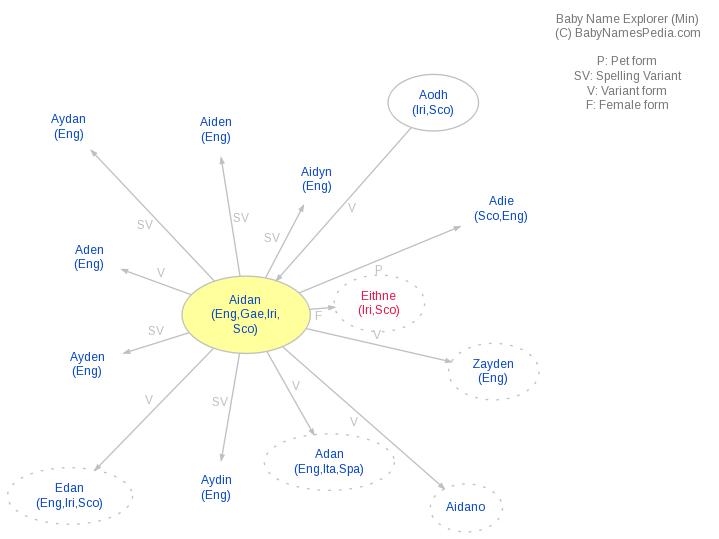