What does Ailsa mean?

[ 2 syll. ai-(l)sa, ail-sa ] The baby girl name Ailsa is pronounced as AY-LAA †. Ailsa is of Old Norse and Germanic origin. It is used mainly in the Scottish language. Old Norse origin: It is from the word ey meaning 'island'. The name is of debated origin; it is usually taken to derive from the name of an rocky islet off Scotland originally known as Ailsa Craig or Alfsigesey, meaning 'island of Alfsigr' in Old Norse. It could also be derived from Elsa, or from a Scottish pet form of Alice, or else from its use as an Anglicized form of Ealasaid. In Gaelic, Ailsa Craig is also known as Creag Ealasaid.

Ailsa is a familiar form of Alice in the Scottish language.

Another variant of Ailsa is the Scottish familiar form Ailie.

Ailsa is not frequently used as a baby girl name. It is not ranked within the top 1000. Among the family of girl names directly linked to Ailsa, Alice was the most widely used in 2018. 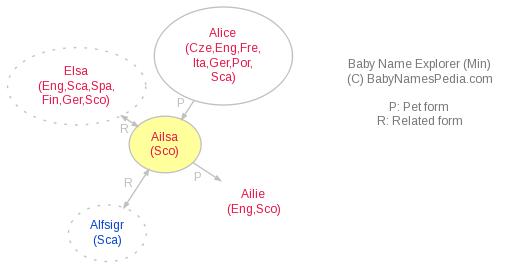