What does Alan mean?

[ 2 syll. a-lan, al-an ] The baby boy name Alan is pronounced as AEL-ahN (English) †. Alan is used chiefly in the Breton, English, German, and Scottish languages, and it is derived from Celtic origins. The name is of the meaning little rock; harmony, peace. Alanus (Latinized) is an old form of Alan. The name is of debated origin; it could be from 'ailin', which is from 'al', or else it could be from 'alun' (meaning harmony, peace). The French form Alain could also be from the tribe of the Alans, an Iranian people who migrated into Europe around the 4th and 5th centuries. The name was borne by a 5th-century saint in Brittany, and was consequently popular there. It was later brought to England by Normans such as Alan, Earl of Brittany, a Breton follower of William the Conqueror. The name became fairly popular in medieval times, but it later saw a decline in use until a revival along with other medieval names in the 19th century. Forms such as Allan and Allen usually represent transferred use of the surnames. In literature, it is borne by one of Robin Hood's Merry Men, Alan-a-Dale, as well as Alan Breck in Robert Louis Stevenson's novel Kidnapped (1886). The name Alana (English) and the name Alanda (English) are the female forms of Alan.

Alan is a classic favorite. At present it is still popular as a baby name for boys, though not to the extent it was before. The name's popularity jumped from the 1900s up to the 1950s; before that, it was of occasional use only. At the modest peak of its usage in 1951, 0.439% of baby boys were given the name Alan. Its ranking then was #40. The baby name has since experienced a fall in popularity. In 2018, its usage was 0.116% and its ranking #172, but it was nonetheless the most popular out of all boy names in its group. In 2018, Alan was thrice as popular as the next most popular name, Allen. 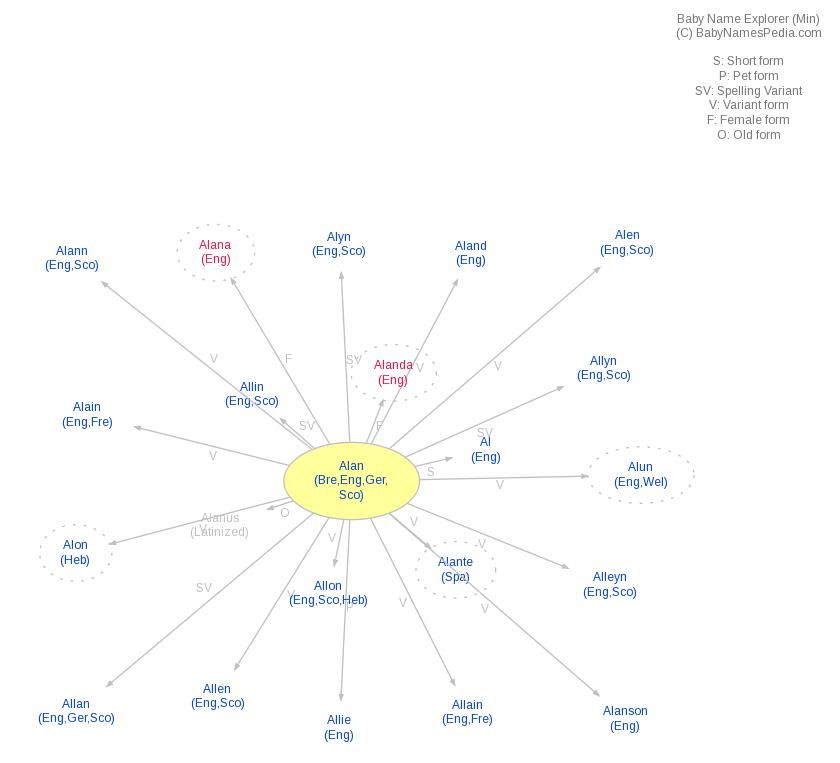