What does Alaric mean?

[ 3 syll. a-la-ric, al-ar-ic ] The baby boy name Alaric is pronounced in English as AEL-ah-RihK †. Alaric is largely used in the English language and its origin is Germanic. The name is of the meaning ruler of all; noble ruler. Alareiks (Gothic) is an original form of Alaric. The name is from the combination of the Germanic 'ala', 'ali' (foreign, other), or 'adal' (meaning noble, honorable) with the element 'ric' (rich, powerful, ruler). It has traditionally been a name for the Visigothic kings, most famously Alaric I who plundered Rome in the 5th century. The Blessed Alaricus or Adalricus was a Swabian prince who became a monk in Switzerland in the tenth century; the name has sometimes been bestowed in honor of him. To English speakers, the name was first introduced by the Normans in the 11th century, and it later saw an increase in popularity during the Gothic and medieval revival of the 19th century.

Alaric is an English variant of the name Ulrich (English and German).

The name Alarice (English) is the female equivalent of Alaric.

Alaric is somewhat popular as a baby name for boys. The name's popularity has been growing since the 2010s; before that, it was of very modest use only. Its usage peaked recently in 2018 with 0.011% of baby boys being given the name Alaric. Its ranking then was #976. Among all boy names in its group, Alaric was the most frequently used in 2018.

A baby name that sounds like Alaric is the name Algerico. 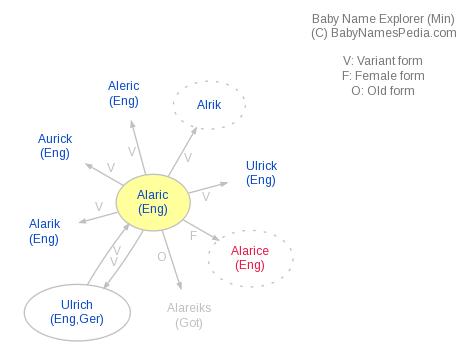