What does Albert mean?

[ 2 syll. al-ber(t), alb-e-rt ] The baby boy name Albert is pronounced as AEL-BahRT in English, AAL-BahRT in Dutch, aeL-BEHR in French, or AAL-BehRT in Polish †. Albert is largely used in the Irish, Dutch, English, French, German, Polish, Russian, and Slavic languages, and it is derived from Celtic and Germanic origins. From Germanic roots, its meaning is nobly famous - in this context, Albert can be used in the Dutch, English, French, German, Polish, Russian, and Slavic languages. A two-element name, it is derived from the elements 'adal' meaning noble, honorable ; 'berht' bright, famous. Adalbert (Germanic) and Adalbrecht (Germanic) are older forms of Albert. The Old German Adalbert was shortened to Albert in France, and it was brought to England in the 11th century where it displaced the Old English Aepelbeorht. The name declined in use by the 17th century, until it was revived by association with Queen Victoria's German-born husband Prince Albert of Saxe-Coburg-Gotha (1819-1861). In its various forms, the name has been popular among royalty in Western Europe, including two 20th century kings of Belgium. In Ireland, the name is used as an Anglicized form of Ailbhe.

Albert is an Irish variant of the name Ailbhe (Gaelic and Irish).

The name Alberta (English, German, Hungarian, Italian, and Polish) is the female equivalent of Albert.

Albert is a classic favorite. Currently it is still a fairly popular baby name for boys, though not to the extent it was previously. At the height of its usage in 1901, 1.141% of baby boys were given the name Albert. It ranked at #15 then. The baby name has since experienced a steep fall in popularity, and is of occasional use in recent years. In 2018, its usage was only 0.034% and its ranking #452, but it was nonetheless the most popular within all boy names in its group. In 2018, 49% more boys were named Albert than the subsequent ranked name, Alberto. The name Albert has been mostly given to baby boys, though it has also been used as a girl name in the past century. In 1930, the name Albert was given to 138 times as many baby boys than girls. 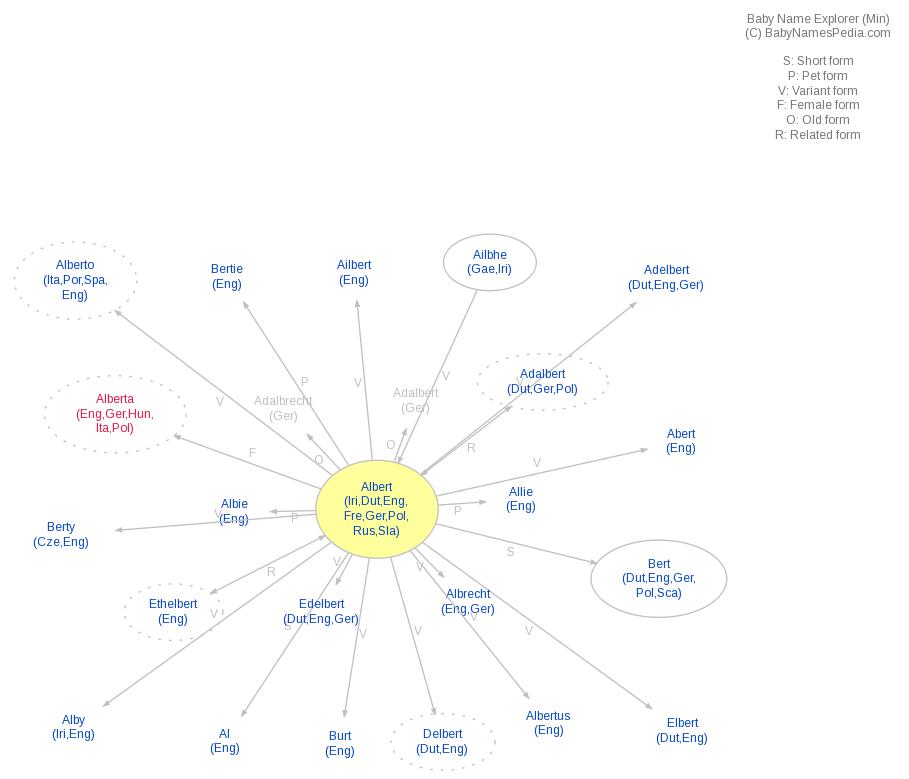