What does Albin mean?

[ 2 syll. al-bin, alb-in ] The baby boy name Albin is pronounced as AAL-BiyN in Polish †. Albin is used predominantly in the Czech, English, German, Polish, Scandinavian, Slavic, and Russian languages, and its origin is Latin and Old English. From Latin roots, its meaning is white; blond, fair one - in this context, Albin can be used in the Czech, English, German, Polish, Scandinavian, and Slavic languages. The name is derived form the Roman nickname Albinus (Latin), itself from the Roman family name 'Albius' and the Latin 'albus'. Saint Albinus of Angers (470-550) was a reputable French abbot and bishop in Brittany.

In addition, Albin is a variant of the name Alban (English and German).

Albin is also a variant (Polish) of the name Albus (English).

Albin is also a variant (Polish and Russian) of the name Alvin (English).

The name Albina (English, German, Italian, Polish, Russian, and Slavic) is the female version of Albin.

Albin is an uncommon baby name for boys. At the modest height of its usage in 1904, 0.016% of baby boys were given the name Albin. Its ranking then was #453. The baby name has since steeply fallen in popularity, and is currently of sporadic use. In 2018, within the group of boy names directly linked to Albin, Alvin was the most popular. 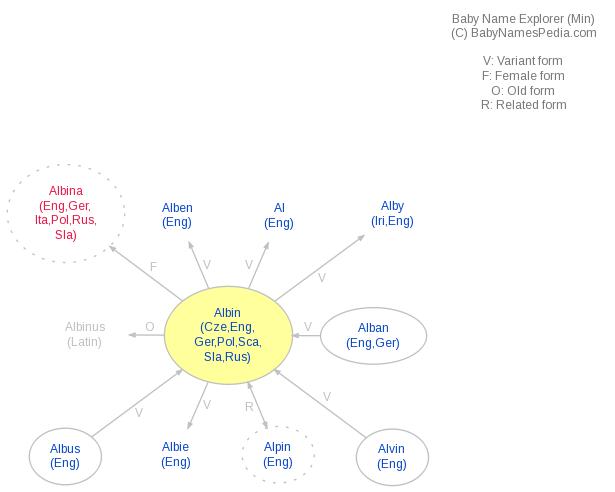