What does Albina mean?

[ 3 syll. al-bi-na, alb-ina ] The baby girl name Albina is pronounced in Italian and Polish as aaL-BIY-Naa †. Albina's language of origin is Latin. It is predominantly used in English, German, Italian, Polish, Russian, and Slavic. The meaning of Albina is 'white; blond, fair one'. It is derived from the word albus which is of the meaning 'white'. An original form of the name is Albinus (Latin). Saint Albina was a young woman martyred in Caesarea in 250.

Albina is a form of the Catalan, English, German, Italian, Spanish, and Czech Alba.

Albina is the feminine equivalent of the Czech, English, German, Polish, Scandinavian, Slavic, and Russian Albin.

See also the related form, the Gaelic and Irish Ailbhe.

Albina is an unusual baby girl name. Its usage peaked in 1917 with 0.020% of baby girls being named Albina. It was #424 in rank then. The baby name has steeply slipped in popularity since then, and is used only on a very modest scale now. Among all girl names in its family, Albina was nevertheless the most frequently used in 2018. 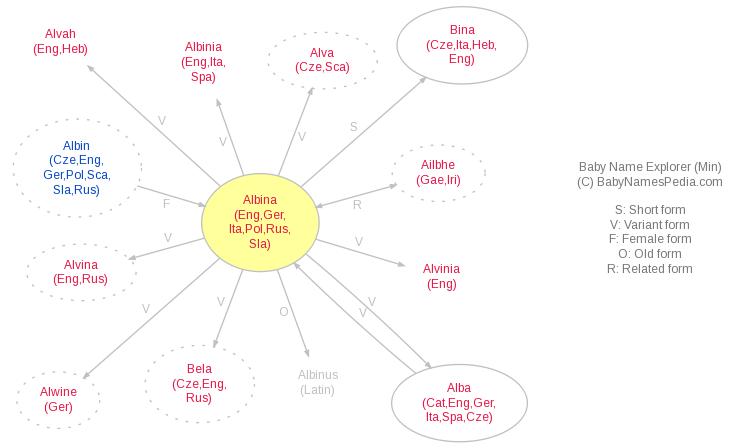