What does Alden mean?

[ 2 syll. al-den, ald-en ] The baby boy name Alden is sometimes used as a girl name. It is pronounced as AELDihN †. Alden is largely used in the English language and it is derived from Old English origins. The name's meaning is old friend. A two-element name, it is derived from the elements 'eald' meaning old ; 'wine' friend. Aldwyn (Old English) and Ealdwine (Old English) are original forms of Alden. The name was popular in the Middle Ages.

Alden has 15 variants that are used in English and other languages. Variants used in English include Aldan, Aldean, Aldon, Aldun, Aldwen, Aldwin, Aldwyn, Aldyn, Auden, Elden, Eldin, Eldwen, and Eldwin. The variant spelling Aldin is another English form. A variant of Alden in other languages is Aldous (German).

Alden is fairly popular as a baby name for boys. The name's popularity has been growing since the 1990s. Its usage peaked modestly in 2018 with 0.021% of baby boys being given the name Alden. It ranked at #638 then. Among all boy names in its group, Alden was the most commonly used in 2018. Alden has mostly been a baby boy name in the past century. 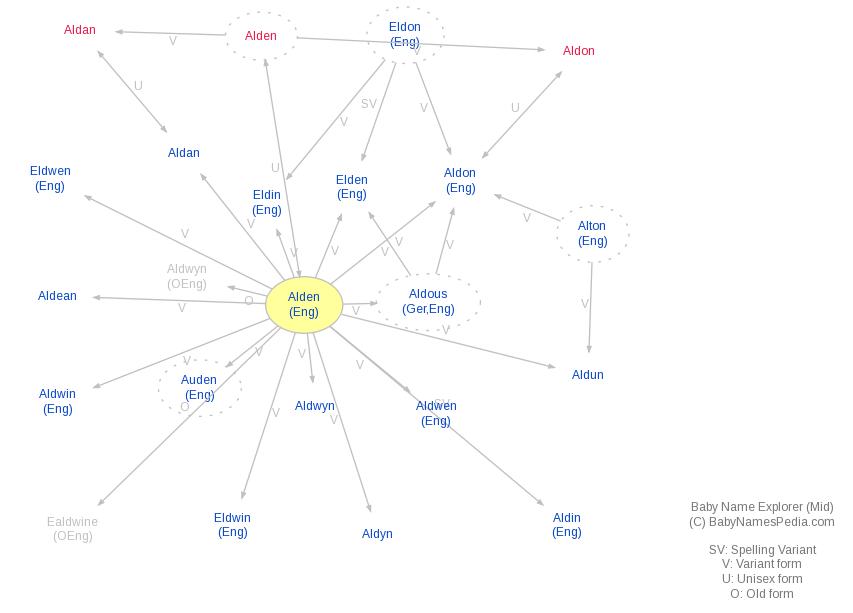