What does Alejandra mean?

[ 4 syll. a-le-jan-dra, al-ejand-ra ] The baby girl name Alejandra is also used as a boy name, though it is far more popular for girls. It is pronounced as aa-Ley-HHAANDRah †. Alejandra is of Old Greek origin. It is used mainly in English and Spanish.

In addition, Alejandra is a form (Spanish) of Alexandra.

Alejandra is the feminine version of the English and Spanish Alejandro.

Another form of the name is the English and Spanish shortening Alondra.

Alejandra is rather popular as a baby girl name. The name grew in popularity from the 1970s up to the 1990s; prior to that, it was of only irregular use. Its usage peaked modestly in 1994 with 0.112% of baby girls being named Alejandra. It had a ranking of #147 then. The baby name has experienced a decline in frequency since then. In 2018, it ranked at #512 with a usage of 0.033%. Among the family of girl names directly related to Alejandra, Alexandra was the most frequently used. It was 4 times more popular than Alejandra in 2018. Alejandra has in the last century been mainly given to baby girls.

Baby names that sound like Alejandra include Alejanda, Alejandr, Alejandro, and Alondra. 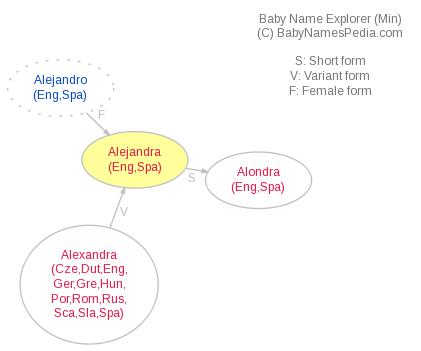