What does Alessia mean?

[ 4 syll. a-les-sia, al-ess-ia ] The baby girl name Alessia is also used as a boy name, though it is far more popular for girls. It is pronounced aa-LEY-Siy-aa- †. Alessia is of Old Greek origin. It is used mainly in Italian, Spanish, and English.

Alessia is a familiar form of the English, Italian, and Spanish Alessandra in the Italian language.

Alessia is also a form of Alexandra in the Italian and Spanish languages.

Alessia is also a form of the English, German, Spanish, and Greek Alexia in the English and Italian languages.

Alessia is rather popular as a baby girl name, and it is also perceived as trendy. The name has been rising in popularity since the 2010s; prior to that, it was of only very modest use. At the recent peak of its usage in 2018, 0.029% of baby girls were named Alessia. It was #580 in rank then. Out of the family of girl names directly related to Alessia, Alexandra was the most frequently used in 2018. It was 5 times more commonly used than Alessia in that year. Alessia has in the last century been primarily given to baby girls. 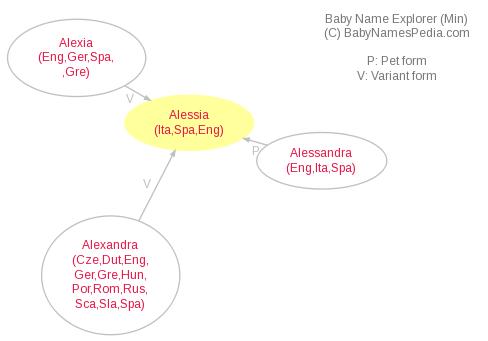