What does Alexander mean?

[ 4 syll. a-le-xan-der, al-exand-er ] The baby boy name Alexander is pronounced as aeL-ahG-ZAEN-DahR in English, aa-LahK-SAAN-DahR in Dutch, or aa-LehK-SAAN-DehR in German †. Alexander is a Dutch, English, German, Hungarian, and Slavic name of Old Greek origin. The name is of the meaning defender of men. It is derived from the elements 'alexein' meaning to ward off, to defend ; 'aner' man. Alexandros (Old Greek) is an older form of Alexander.

The name was first borne by Paris the prince of Troy, who was given the nickname by herdsmen whom he had defended. It later appeared in the Macedonian royal family, who alternately named their kings Alexander and Philip. The most famous bearer was Alexander III, better known as Alexander the Great (356-323 BC), the King of Macedonia who in his twenties conquered most of Asia Minor, Babylon, Egypt, Persia, and Syria. Through his conquests and widely translated accounts of his life in the medieval 'Alexander romances', the name came into widespread use throughout Europe. At least twenty saints, three Russian emperors and eight popes later bore the name. The name was even adopted in Hebrew after his benign reign over Palestine.

English speakers adopted the name from the 12th century. It was especially popular in Scotland after it was borne by three Scottish kings, starting from Alexander I, who was given his name by his mother, who was partially of Hungarian descent. The name was popular in Hungary, but it was not formerly used in Scotland. In literature, Alexander has appeared as the name of the servant to Cressida in William Shakespeare's play The History of Troilus and Cressida (1602).

Alexander is a variant (Dutch, English, German, Hungarian, and Slavic) of the name Alexandros (Greek).

What are the Variant Forms of Alexander?

Alexander is very popular as a baby name for boys. The name's popularity jumped from the 1950s up to the 1990s. At the height of its usage in 1993, 0.994% of baby boys were given the name Alexander. Its ranking then was #21. The baby name has since experienced a fall in popularity. In 2018, its usage was 0.622% and its ranking #11, but it was nonetheless the most popular within all boy names in its group. In 2018, Alexander was thrice as popular as the next most popular name, Axel. Alexander has predominantly been a baby boy name, though in the past century it has also been used for girls. In 1992, baby boys named Alexander outnumbered girls by 91 times. 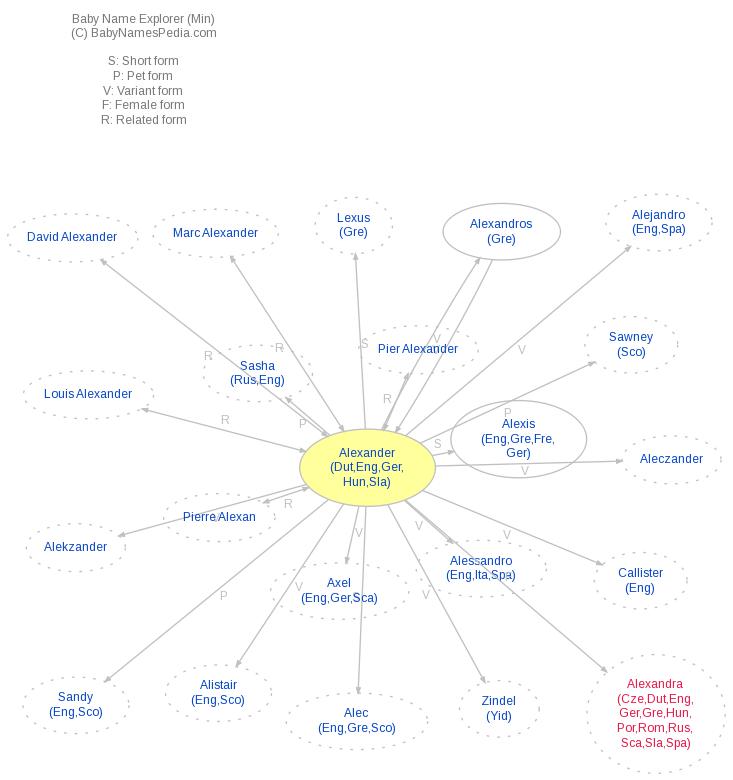