What does Alexis mean?

[ 3 syll. a-le-xis, al-ex-is ] The baby girl name Alexis is also used as a boy name, though the use for girls is more popular. It is pronounced ah-LEHK-SihS (English) or aeL-ehK-SIY (French) †. Alexis' language of origin is Old Greek. It is predominantly used in English, German, Spanish, French, and Greek. The meaning of Alexis is 'defender'. It is derived from the word alexein which is of the meaning 'to ward off, to defend'. The feminine use of the name was first popularized by the character Alexis Carrington in the 1980s American soap opera Dynasty, who was portrayed by Joan Collins. The form Lexus was in recent times promoted by association with the luxury car brand, especially in the USA. See Alexis for more information.

In addition, Alexis is a contracted form (English, German, and Spanish) of Alexandra.

The name Alexis is widely used; it has 23 forms that are used in English and foreign languages. English forms of the name include Ahlexis, Alaxis, Alecsis, Alecxis, Aleexis, Aleksis, Alexa, Alexas, Alexias, Alexiou, Alexius, Alexiz, Alexus, Alixis, Alixus, Alyxis, Elexis, Elexus, Lexis, and Lexus. Other English forms include the familiar form Alexina (used in Scottish, and Spanish as well), and the spelling variant Alexys. The Spanish Alicio is a form of Alexis that is used in foreign languages.

Alexis is a popular baby girl name. The name increased in popularity from the 1960s up to the 1990s. At the peak of its usage in 1998, 1.021% of baby girls were named Alexis. It was #6 in rank then. The baby name has steeply slipped in popularity since then. In 2018, it ranked at #179 with a usage of only 0.089%. Out of the family of girl names directly related to Alexis, Alexa was the most commonly used. It was 86% more commonly used than Alexis in 2018. Though there were times from 1964 to 1964 when more boys than baby girls were given the name Alexis, the name is today more frequently used for baby girls. In 2017, 3 times more baby girls than boys were given the name Alexis. 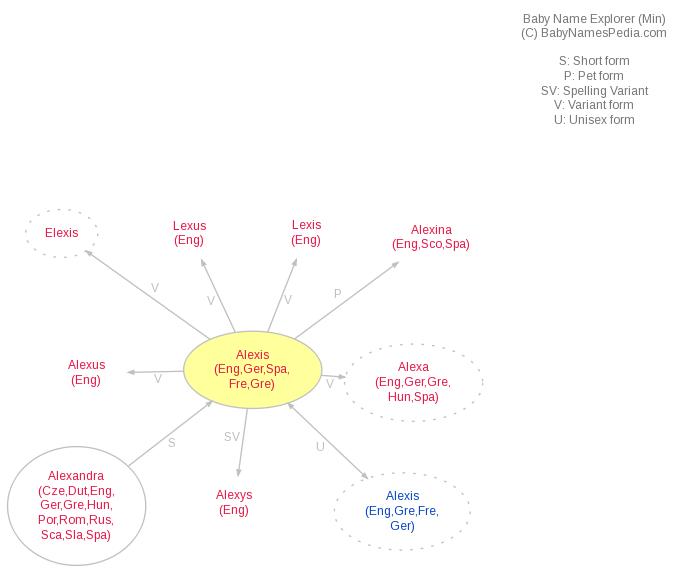