What does Alexis mean?

[ 3 syll. a-le-xis, al-ex-is ] The baby boy name Alexis is also used as a girl name, with the latter form being more common. Its pronunciation is ah-LEHK-SihS (English) or aeL-ehK-SIY (French) †. Alexis is used predominantly in the English, Greek, French, and German languages, and its origin is Old Greek. The name is of the meaning defender. It is derived from the element 'alexein' meaning to ward off, to defend. Alexios (Old Greek) and Alexius (Latin) are old forms of Alexis. The name was borne by numerous saints; among them, the 5th-century Saint Alexius of Rome was the most famous. According to legend, he fled his arranged marriage to go on pilgrimage, and he was later venerated as a 'Man of God'. See Alexis for more information.

In addition, Alexis is a short form (English and Greek) of the name Alexander (Dutch, English, German, Hungarian, and Slavic).

The name Alexia (English, German, Spanish, and Greek) is the female version of Alexis.

What are the Variant Forms of Alexis?

Alexis is fairly popular as a baby name for boys. The name's popularity rose from the 1950s up to the 2000s; before that, it was of very light use only. At the modest peak of its usage in 2004, 0.198% of baby boys were given the name Alexis. Its ranking then was #103. The baby name has since fallen in popularity. In 2018, its usage was 0.035% and its ranking #445. Out of the group of boy names directly linked to Alexis, Alexander was the most popular. In 2018, its use outnumbered Alexis' by 18 times. There were times from 1964 to 1964 that the name Alexis was given more often to boys, but it is more popular as a girl name today. In 2017, 3 times as many girls than boys were given the name Alexis. 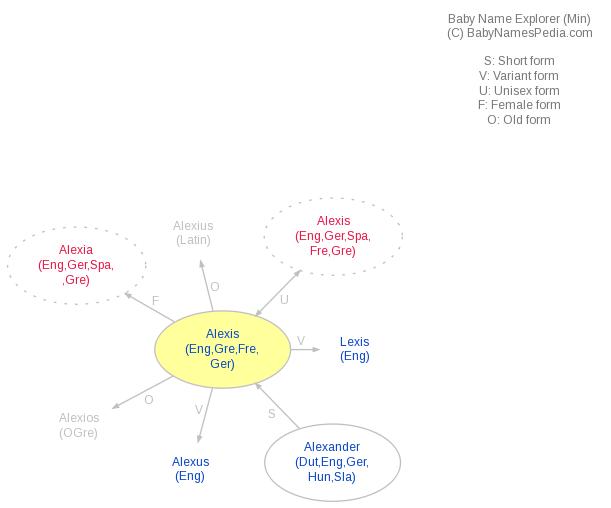