What does Alf mean?

Alf is used chiefly in the English language and its origin, is Gothic, Old English, Old Norse. The name has been used as a diminutive of Alfred since the late 19th century. In the 1960s, it was made known as the name of the fictional TV character Alf Garnett played by Warren Mitchell in various British sitcoms.

The name Alva (English and Scandinavian) is a variant of Alf.

Variant forms share the origin and meaning of Alf.

Alf is used predominantly in the Scandinavian language and it is derived from Old Norse origins. It is derived from the element 'alfr' which means elf, supernatural being. In Norse mythology, King Alf was the son of Sigar, and the suitor of Alfhild, whom he eventually married. The name Alva (Czech and Scandinavian) is the female version of Alf.

The name Alf (English) is a variant of Alf.

Alf is a variant of the name Alfie (English and Spanish).

Alf is also a variant of the name Alfonso (English, Italian, and Spanish).

Alf is also a contraction of the name Alfred (Dutch, English, French, German, Polish, and Scandinavian) in the English language.

Alf is also a variant of the name Alf (Scandinavian) in the English language.

Alf is unusual as a baby name for boys. Its usage peaked modestly in 1901 with 0.010% of baby boys being given the name Alf. It ranked at #596 then. The baby name has since experienced a substantial loss in popularity, and is currently of infrequent use. In 2018, among the group of boy names directly linked to Alf, Alfred was the most popular. 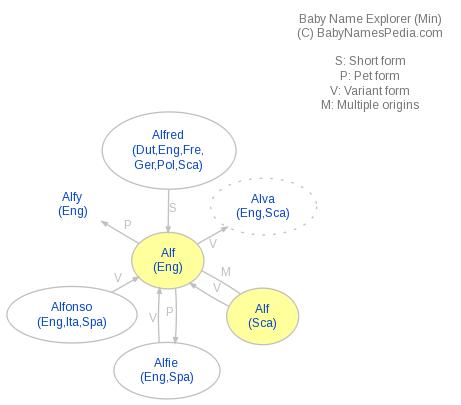