What does Alfonso mean?

[ 3 syll. al-fon-so, alf-o-nso ] The baby boy name Alfonso is pronounced as aaL-FAON-Sow (Italian) or aaL-FOWN-Sow (Spanish) †. Alfonso is an English, Italian, and Spanish name of Gothic origin. The name's meaning is noble and ready. It is derived from the elements 'adal' meaning noble, honorable + 'ala' all + 'hadu' struggle + 'hild' battle, fight + 'funs' ready. Adalfuns (Germanic), Hadufuns (Germanic), Hildefons (Gothic), and Hildefonso (Old Spanish) are old forms of Alfonso. The name is of disputed origin. The first element of the name could be 'adal' (meaning noble, honorable), or else 'ala', hadu', or 'hild' (battle, fight), while the second element is 'funs'. It is possible that various distinct Visigothic names have been merged into one. The name was borne in the 9th century by Saint Alphonsus the bishop of Astorga, and in the 19th century by Saint Alphonsus Liguori (1696-1787), an Italian bishop regarded as a Doctor of the Church. It was also borne by more than ten kings of Portugal and ancient Spain from the 7th to the 14th century, including King Alfonso I of Asturias (693-757), who played a key role in establishing Christianity in Spain. The name consequently grew in popularity. It is today common among Spanish-speakers in the USA. The name Alphonsus is also used an Anglicized form of the Gaelic name Anluan, which could be of a second element meaning 'warrior' or 'hound'. The name Alfonsina (Italian) is the female equivalent of Alfonso.

Alfonso is a widely used name; it has 38 variants that are used in English and other languages. Variants used in English include Alf, Alfie (also Spanish), Alfonse, Alfonsin, Alfonsino, Alfonsus (also Latin), Alfonza, Alfonzus, Alonso (also Italian and Spanish), Alphonse (also French), Alphonso (also Italian and Spanish), Alphonsus (also Irish and Latinized), Alphonz, Alphonzo, Alphonzus, Fonsi, Lon, and Lonnie. Other English forms include the contraction Fons (used in Dutch too), the diminutive forms Fonsie, Fonz, and Fonzie, and the variant spelling Alfonzo (used in Spanish too).

Alfonso is a classic favorite. Currently it is still somewhat popular as a baby name for boys, though not to the extent it was before. At the modest peak of its usage in 1930, 0.033% of baby boys were given the name Alfonso. It ranked at #295 then. The baby name has since experienced a fall in popularity, and is of occasional use in recent years. In 2018, its usage was 0.012% and its ranking #913. Out of the group of boy names directly linked to Alfonso, Alonzo was the most popular. In 2018, the name was thrice as popular as Alfonso. 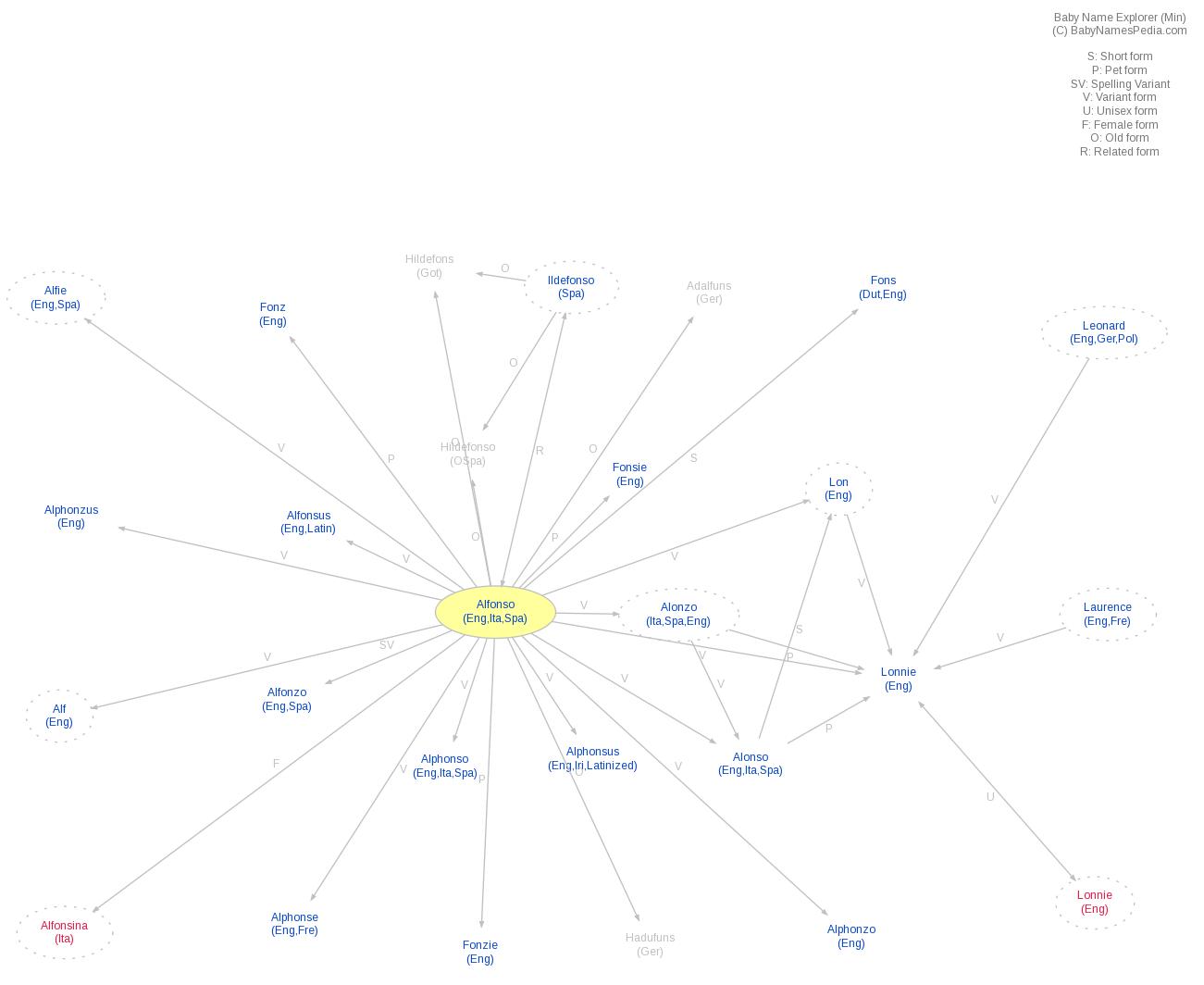