What does Alfred mean?

[ 2 syll. al-fred, alf-r-ed ] The baby boy name Alfred is pronounced as AEL-FRahD in English, AAL-FRahT in Dutch, aeL-FREHD in French, or AAL-FRehT in German and Polish †. Alfred is largely used in the Dutch, English, French, German, Polish, and Scandinavian languages, and it is derived from Old English origins. The name's meaning is inspired advice; old peace. A two-element name, it is from the elements 'aelf' meaning elf, supernatural being ; 'raed' counsel, advice. The name could be derived from Aelfraed (Old English), meaning 'inspired advice', or Ealdfrith (Old English) or Alfrid, meaning 'old peace'.

It was rather common before the Norman Conquest, and was borne by Alfred the Great (849-899), King of Wesse; he was widely respected for his inspiring rule, for driving the Danes out of England, and for his patronage of learning and culture. After the conquest, it was adopted in different forms by the Normans, and was one of the few Old English names that became popular beyond England and across the continent.

It later fell into disuse by the end of the Middle Ages before experiencing a revival among other medieval names in the 19th century. The form Alured was first coined in the 19th century, from a misreading of 'u' for the 'v' in the Latin form Alvred; 'v' was the transcription used for the alphabet 'f'. In literature, the name has appeared in the Charles Dickens novel Pickwick Papers (1836-1837) as Alfred Jingle. The form Alfie was popularized in England by the fictional young boy named Alfie in childrens' books written by Shirley Hughes in the mid 20th century, and later by the character Alfie Moon in the television soap opera East Enders (1985-). The name Alfreda (English, German, Italian, and Polish) is the female equivalent of Alfred.

The name Alfred is used to a great extent; it has 34 variants that are used in English and other languages. Variants used in English include Aelfraed, Ahlfred, Ailfred, Ailfryd, Alfea, Alfee, Alfeo, Alferd, Alfey, Alford, Alfre, Alfredas, Alfredo (used in Italian, Portuguese, and Spanish as well), Alfredos, Alfredus, Alfrey, Alfrid, Alfried, Alfryd, Elfrid, Freddie, and Freddy. Other English variants include the short forms Al, Alf, and Fred (used in German as well), and the diminutive forms Alfie, Alfy, and Allie.

Alfred is a classic favorite. Currently it is still somewhat popular as a baby name for boys, though to a lesser extent than it was previously. At the height of its usage in 1928, 0.546% of baby boys were given the name Alfred. It ranked at #33 then. The baby name has since substantially fallen in popularity, and is of occasional use in recent years. In 2018, its usage was only 0.013% and its ranking #872. Within the group of boy names directly linked to Alfred, Avery was the most popular. In 2018, it was used 8 times more than Alfred. 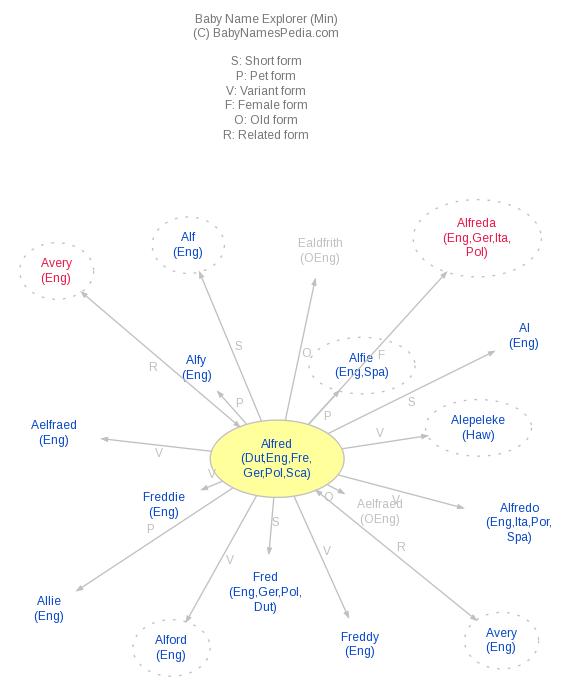