What does Alfredo mean?

[ 3 syll. al-fre-do, alf-r-edo ] The baby boy name Alfredo is pronounced as aaL-FREH-Dow (Italian) or aaL-FREH-DHow (Spanish) †. Alfredo is used predominantly in the English, Italian, Portuguese, and Spanish languages. It is derived from Old English origins. Alfredo is a variation of the name Alfred (Dutch, English, French, German, Polish, and Scandinavian).

Fredo (contraction in Italian, Portuguese, and Spanish) is a variation of Alfredo.

Alfredo is a classic favorite. Today it is still a rather popular baby boy name, but to a lesser degree than it was before. The name's popularity jumped from the 1900s up to the 1990s; before that, it was of modest use only. At the peak of its usage in 1993, 0.052% of baby boys were given the name Alfredo. It had a ranking of #267 then. The baby name has experienced a loss in popularity since then. In 2018, its usage was 0.023% and its ranking #613, but it was nonetheless the most popular out of all boy names in its family. In 2018, Alfredo was 76% more frequently used than the subsequent ranked name, Alfred. 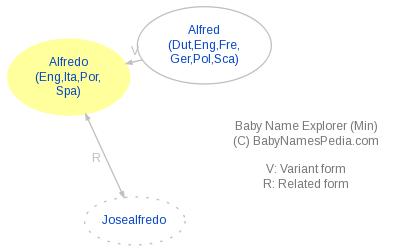