What does Alice mean?

[ 2 syll. a-li-ce, al-ice ] The baby girl name Alice is also used as a boy name, though it is far more popular for girls. It is pronounced AEL-ihS in English, ae-LIYS in French, or aa-LIY-CHeh in Italian †. Alice is of Germanic origin. It is used mainly in Czech, English, French, Italian, German, Portuguese, and Scandinavian. The meaning of Alice is 'of a noble kind'. It is a two-element name derived from adal and heit which are of the meanings 'noble, honorable' and 'kind, sort, type' respectively. The old form Adalheidis (Germanic) had the short form Adelais (Old French), which itself was further contracted to Adaliz (Old French) and then Alis (Old French). The latter were introduced by the Normans into England in further forms such as Aaliz, Adalis, Alix, Aliz, Alys, and Alyx, and eventually became the name Alice.

The name Alice was popularized by the Bele Aaliz medieval romances, and by the 12th century it became widely used in England as well as France. It appeared in Shakespeare's play Henry V (1599) as the name of the attendant Lady Alice. It lost its popularity by the 17th century, having garnered rustic and old-fashioned associations, before enjoying a revival in the 19th century via romance literature, often in the Latinized form Alicia.

It was further popularized by the birth of Queen Victoria's daughter Princess Alice (1843-1878), and the titular heroine of Lewis Carroll's classic children's novels, Alice's Adventures in Wonderland (1865) and Through the Looking-Glass (1871), who is based on Carroll's child friend Alice Pleasance Liddell (1852-1934), the daughter of the Dean of Christ Church, Oxford. See Alice for more information.

Alice is a Czech, English, French, and Italian familiar form of the English and Italian Adelaide.

Alice is also an English, French, German, Italian, and Portuguese form of the Dutch, German, and Scandinavian Adelheid.

What are the Variant Forms of Alice?

See also the related form, the English and Hebrew Aliza.

Alice is popular as a baby girl name, and it is also regarded as trendy. At the height of its usage in 1906, 1.338% of baby girls were named Alice. It was #8 in rank then. The baby name has seen a marked drop in frequency since then. In 2018, it ranked at #71 with a usage of 0.197%, having regained its popularity somewhat in the recent decade. Within all girl names in its family, Alice was the 3rd most popular after Ellie and Allison. Ellie was 42% more frequently used than Alice in 2018. Alice has in the last century been primarily given to baby girls. In 1937, 170 times more baby girls than boys were given the name Alice. 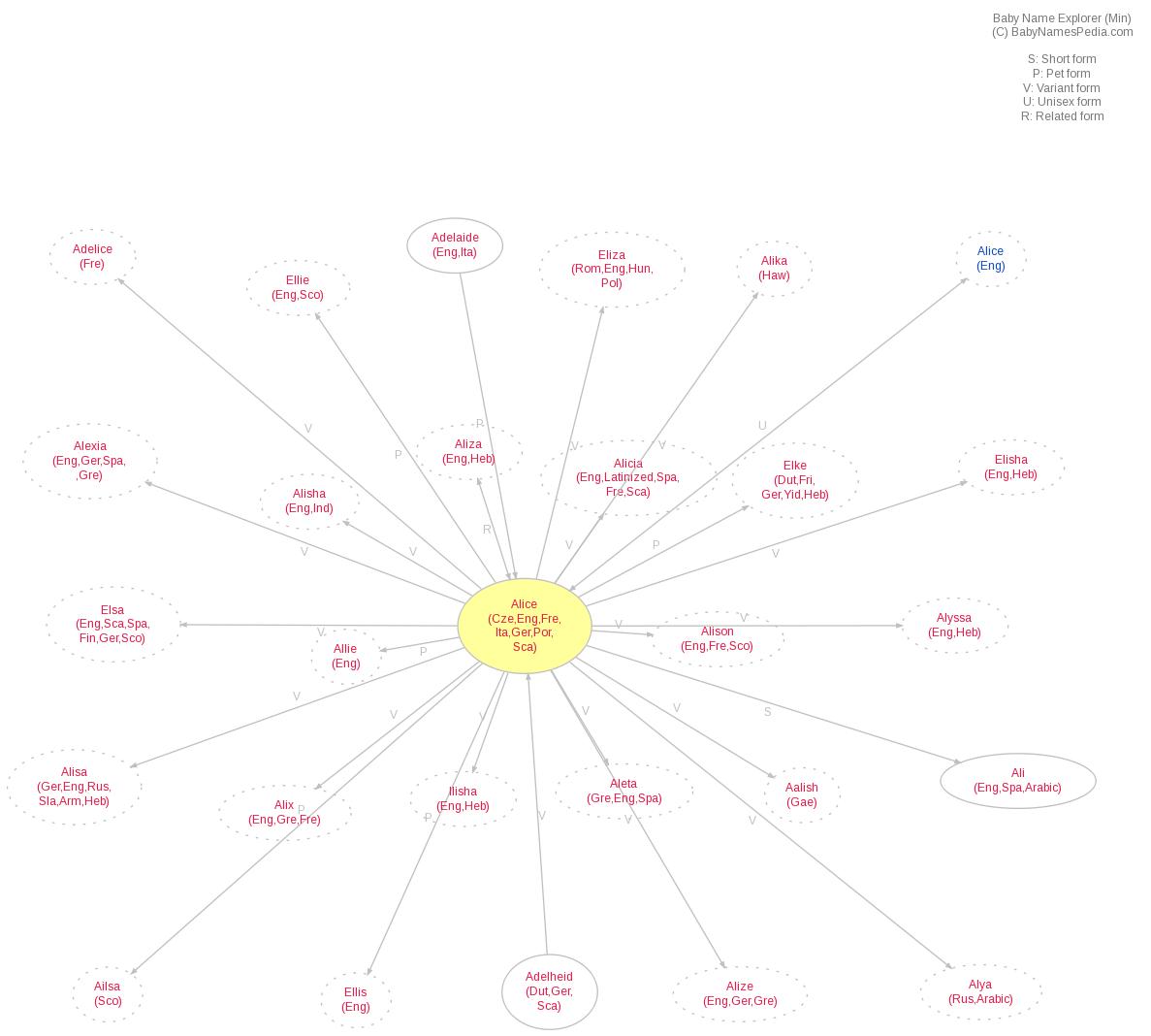