What does Alicia mean?

[ 3 syll. a-li-cia, al-ic-ia ] The baby girl name Alicia is pronounced in English as ah-LIHS-ah, ah-LIHS-Yah, ah-LIH-SH-ah or ah-LIY-SHah, in Spanish as ae-LIY-THYae, or in Spanish-Latin American as ae-LIY-SYae †. Alicia has its origins in the Germanic language. It is used largely in the English, Latinized, Spanish, French, and Scandinavian languages. The meaning of Alicia is 'of a noble kind'. It is a two-element name derived from adal and heit with the meanings 'noble, honorable' and 'kind, sort, type' respectively. The name Alice was Latinized as Alesia and Alicia as early as the 12th century, and in the 19th century, the form Alicia was popularized by romance writers.

Alicia is an English, Latinized, and Spanish form of the English and Italian Adelaide.

Alicia is also an English, Latinized, and Spanish form of the Dutch, German, and Scandinavian Adelheid.

Alicia is also an English, French, Latinized, Scandinavian, and Spanish form of Alice.

Alicia is the feminine equivalent of the Spanish Alicio.

What are the Variant Forms of Alicia?

See also the related form, the English and Hebrew Elisha.

Alicia is an all-time favorite. Currently it is still rather popular as a baby girl name, but to a lesser degree than it was in the past. The name grew in popularity from the 1900s up to the 1980s. Its usage peaked modestly in 1984 with 0.434% of baby girls being named Alicia. It was #40 in rank then. The baby name has experienced a drop in popularity since then. In 2018, it ranked at #391 with a usage of only 0.043%. Among the family of girl names directly related to Alicia, Alice was the most frequently used. It was 5 times more popular than Alicia in 2018. 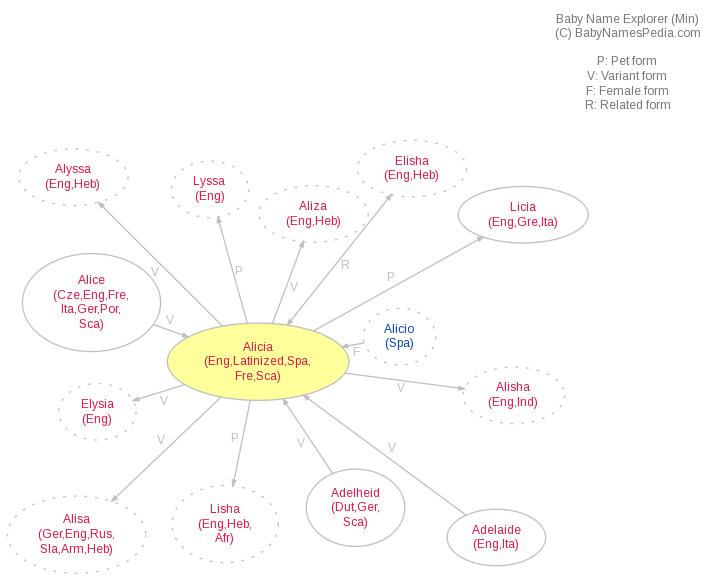