What does Alida mean?

[ 3 syll. a-li-da, al-ida ] The baby girl name Alida is pronounced as aa-LAY-Daa- or aa-LIY-D-ah †. Alida's language of origin is Germanic and Latin, and it is used mainly in the Hungarian, Dutch, German, Italian, English, and Greek languages. Latin origin, Dutch, English, Greek, and Hungarian use: It is derived from the element alaida which means 'little winged girl'.

In addition, Alida is a derivative (Hungarian) of the English, German, Polish, Czech, Romanian, and Spanish Adela.

Alida is also a derivative (Dutch, German, Hungarian, and Italian) of the English and Italian Adelaide.

Alida is also a derivative (English, Greek, and Hungarian) of the German, Italian, and Portuguese Alda.

Alida is a widely used name; it has 27 derivatives that are used in English and foreign languages. Derivatives used in English include Aleda, Aledah, Aleta (used in Greek and Spanish too), Alita, Alleda, Allida, Alyda, Alydia, Dela, Elida, Elidia, Elita, Leda, Leeta, Lela, Lita, Oleda, and Oleta. The contraction Lida, and the variant spelling Aleida (used in German, Dutch, too) are other English forms.

Alida is unusual as a baby name for girls. Its usage peaked modestly in 1902 with 0.010% of baby girls being given the name Alida. Its ranking then was #642. The baby name has since experienced a drop in frequency, and is currently used only on a very light scale. Among the group of girl names directly linked to Alida, Adelaide was the most widely used in 2018. 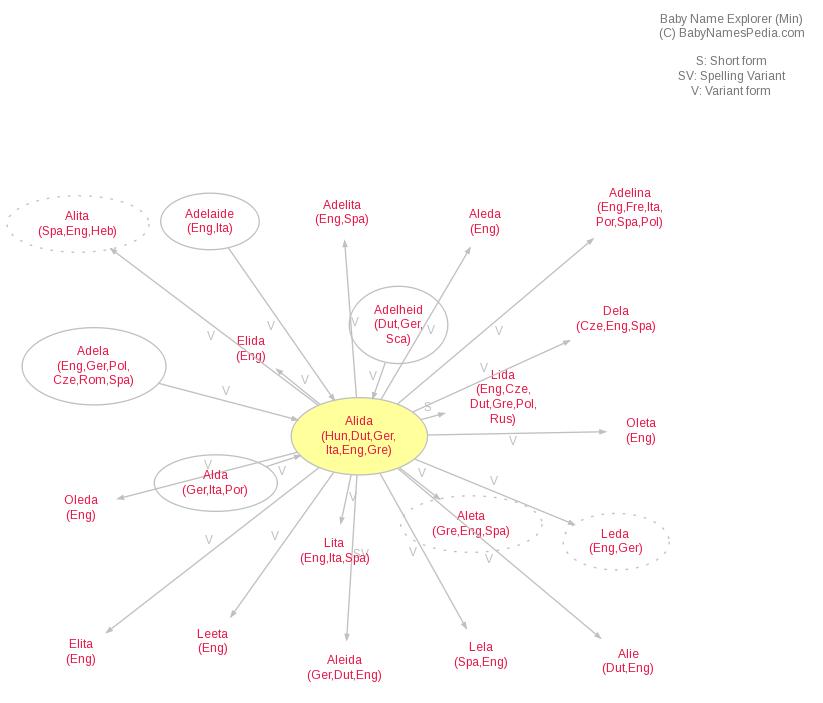