What does Aline mean?

[ 2 syll. a-li-ne, al-ine ] The baby girl name Aline is pronounced as aa-LIH-N or aa-LIYIYN †. Aline is used predominantly in English, French, Armenian, Russian, Irish, and Scottish. Its origin is Germanic, Slavonic, Celtic, Old French, and Old Provençal. Celtic origin, Armenian, English, French, Irish, and Scottish use: The name has been used in Scotland and Ireland as an Anglicized name from the Scottish Gaelic 'àlainn' or the Irish Gaelic 'álainn'.

In addition, Aline is a variation (English and French) of the name Adela (English, German, Polish, Czech, Romanian, and Spanish).

Aline is also a shortening (Armenian, English, and French) of the name Adeline (English and French).

Aline is also a spelling variant (English and French) of the name Aileen (English, Gaelic, German, Irish, and Scottish).

Aline is also a variation (English) of the name Eileen (English, Irish, and Gaelic).

Aline is also a variation of the name Eleanor (English).

The origin and meaning of Aline is inherited by all variant forms.

Aline is unusual as a baby girl name. Its usage peaked modestly in 1909 with 0.039% of baby girls being named Aline. It was #300 in rank then. The baby name has substantially dropped in popularity since then, and is currently of infrequent use. In 2018, among the family of girl names directly related to Aline, Eleanor was the most commonly used. 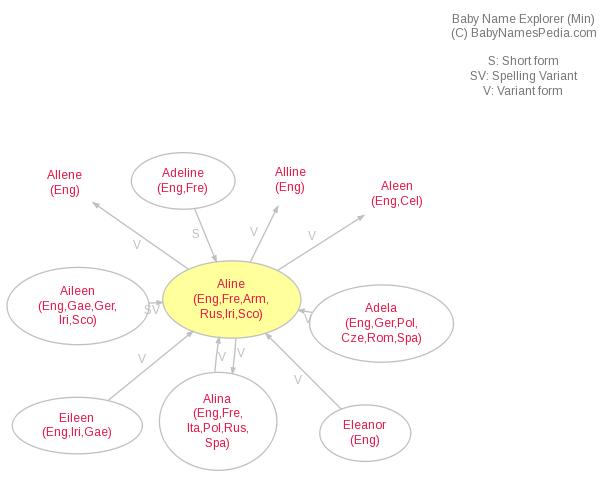