What does Alisa mean?

[ 3 syll. a-li-sa, al-isa ] The baby girl name Alisa is pronounced as aa-LIY-Saa- †. Alisa is used mostly in German, English, Russian, Slavic, Armenian, and Hebrew. It is of Germanic and Hebrew origin. From Hebrew roots, its meaning is joy - in this context, Alisa can be used in the Armenian, English, Hebrew, and Russian languages.

In addition, Alisa is a derivative (German) of the Dutch, German, and Scandinavian name Adelheid.

Alisa is also a derivative (English, German, Russian, and Slavic) of Alice.

Alisa is also a derivative (Armenian, English, and Russian) of the English, Latinized, Spanish, French, and Scandinavian name Alicia.

Alisa has 18 derivatives that are used in English and other languages. English derivatives of Alisa include Aleesa, Alisah, Alisea, Alissa (also used in Hebrew), Alissah, Alitza, Alitzah, Aliysa, Allisa, Allisah, Allissa, Allyah, Allysa, Alyssa (also used in Hebrew), Alyssah, and Illyssa. Another English variant is the familiar form Lisi. A derivative of the name used in other languages is the Scottish Ilisa.

Alisa is unusual as a baby girl name. Its usage peaked modestly in 1970 with 0.063% of baby girls being named Alisa. It was #265 in rank then. The baby name has dropped out of favor since then, and is currently used on a very light scale. In 2018, among the family of girl names directly related to Alisa, Alice was the most regularly used. 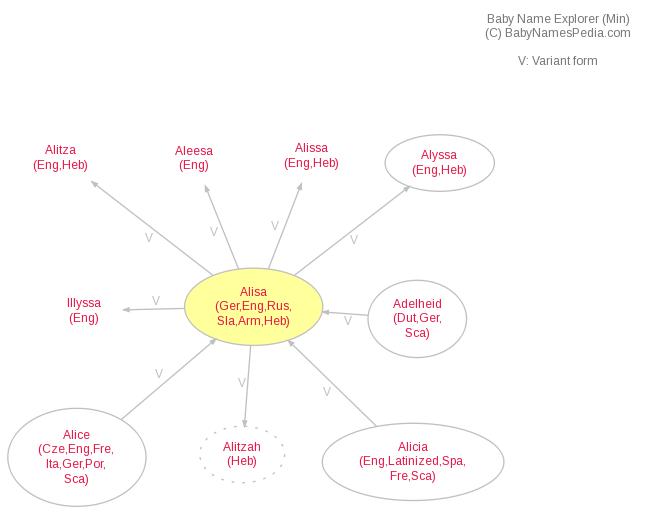