What does Allegra mean?

[ 3 syll. al-le-gra, all-eg-ra ] The baby girl name Allegra is pronounced ah-LEHG-Rah in English or aaL-LEH-GRaa in Italian †. Allegra's language of origin is Italian, and it is predominantly used in English and Italian. It is derived from the element allegro which is of the meaning 'happy, lively, merry'. The meaning of the name is related to the musical term allegro. The name was first coined by the British poet Lord Byron for his illegitimate daughter Allegra Byron (1817-1822), and has since been adopted in English-speaking countries. It is not a traditional Italian name.

Allie (English pet form) is another variant of the name.

Allegra is an uncommon baby name for girls. It is not listed within the top 1000 names. In 2018, within the group of girl names directly related to Allegra, Allie was the most frequently used.

Baby names that sound like Allegra include Alasiri (Swahili), Alegria, and Alegría (Spanish). 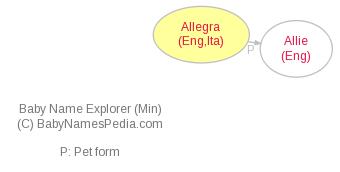