What does Allison mean?

[ 3 syll. al-li-son, all-is-on ] The baby girl name Allison is also used as a boy name, though it is more commonly a girl name. It is pronounced AEL-ih-SahN †. Allison's origin is Germanic, and its use, English, French, and Scottish.

Allison is a form of Alice.

Allison is also a spelling variant of the English, French, and Scottish Alison.

Allison is popular as a baby girl name. The name grew in popularity from the 1940s up to the 1990s; prior to that, it was of only infrequent use. At the modest height of its usage in 1995, 0.423% of baby girls were named Allison. It was #34 in rank then. The baby name has seen a decline in popularity since then. In 2018, it ranked at #69 with a usage of 0.199%, but it was nevertheless the most popular within all girl names in its family. Allison was used 0.963% more than the 2nd most popular name, Alice, in 2018. Although Allison is used more commonly as a baby girl name today, there was a period prior to 1937 that it was more popular with boys. After 1946, increasingly the name became more popular with baby girls than with boys. In 1946, 76% more baby girls than boys were given the name Allison. 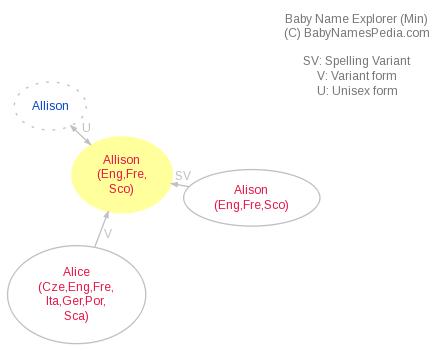