What does Alma mean?

[ 2 syll. al-ma, alm-a ] The baby girl name Alma is also used as a boy name, though it is far more popular for girls. It is pronounced in English as AEL-Mah †.

Alma has its origins in the Latin language. It is used largely in English, German, Hebrew, Italian, and Spanish. It is from the word almus with the meaning 'nourishing, kind'. The name is of debated origin; it is most likely derived from Latin. The Latin root word is familiar from the term Alma Mater 'fostering mother' used to denote one's school. The given name was first used during the Italian Renaissance, but it remained rare. It saw a brief vogue among English speakers after the Crimean War, when the British and their allies defeated the Russians at the Battle of Alma (1854), which was named after a river in the Crimea. This has in recent times appeared as the name of the character Alma Sedgewick in the award-winning British soap opera Coronation Street (1960-), as well as the unsuspecting wife Alma del Mar in the US film Brokeback Mountain (2005).

Alma is of Spanish origin. It is used mainly in English, German, Italian, and Spanish. It is derived from the word alma with the meaning 'soul'. This derivation is explained by a fictional bearer in Tennessee Williams's play Summer and Smoke (1948).

Alma's language of origin is Italian. It is predominantly used in English, German, Italian, and Spanish. It is derived from the word alma which is of the meaning 'soul'. This derivation was used by Edmund Spenser for a character in his epic poem The Faerie Queene (1590,1596).

Alma's language of origin is Hebrew. It is predominantly used in English, German, Italian, and Spanish. Meaning: 'maiden'.

In addition, Alma is a form of the English and Hebrew Alumit.

Alma is also a German form of Amalia.

Alma is an all-time favorite. At present it is still a rather popular baby girl name, but to a lesser degree than it was previously. At the height of its usage in 1901, 0.470% of baby girls were named Alma. It had a ranking of #52 then. The baby name has seen a steep drop in frequency since then, and in recent times it is used only on a modest scale. In 2018, it ranked at #645 with a usage of 0.025%. Within the family of girl names directly related to Alma, Amalia was the most regularly used. It was more widely used than Alma by 12% in 2018. 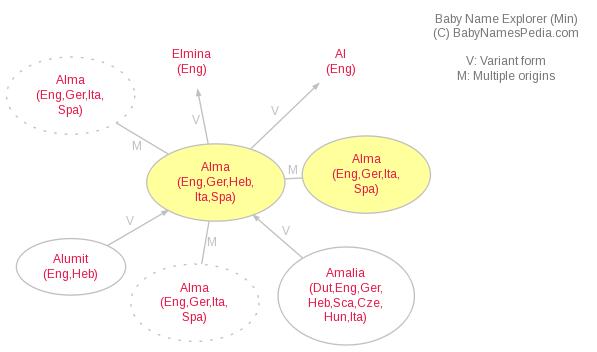