What does Almut mean?

[ 2 syll. al-mut, alm-ut ] The baby girl name Almut is pronounced AA-LMah-T †. Almut's language of origin is Germanic and it is used largely in the German language. The name is of the meaning 'of noble spirit'. It is a two-element name derived from adal meaning 'noble, honorable' ; muot 'spirit, courage'. An older form of Almut is Adelmut (Germanic).

Forms of Almut include the variant spellings Allmut (German) and Almuth (German).

Almut is unusual as a baby name for girls. It is not ranked within the top 1000 names. 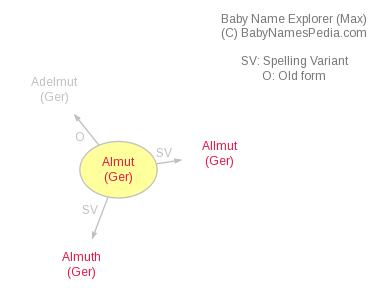