What does Alondra mean?

[ 3 syll. a-lon-dra, al-ond-ra ] The baby girl name Alondra is pronounced as aa-LAO-NDRah- †. Alondra is used chiefly in English and Spanish, and it is derived from Old Greek and Spanish origins. Spanish origin, Spanish use: It is derived literally from the word 'alondra' which is of the meaning lark. This is also a place name found in various parts of America.

In addition, Alondra is a contracted form of the name Alejandra (English and Spanish).

Alondra is also a variant of Alexandra in the Spanish language.

The name Alandra is a variant of Alondra.

Londra (pet form) and Al (contracted form) are other variants of the name.

Alondra is fairly popular as a baby name for girls. The name's popularity increased from the 1990s up to the 2000s. Its usage peaked modestly in 2005 with 0.135% of baby girls being named Alondra. Its ranking then was #120. The baby name has since experienced a fall in popularity. In 2018, its usage was 0.037% and its ranking #456, but it was nevertheless the 2nd most popular after Alexandra, among all girl names in its group. In 2018, the name was thrice as popular as Alondra.

Baby names that sound like Alondra include Alejanda, Alejandr, Alejandra, and Alejandro. 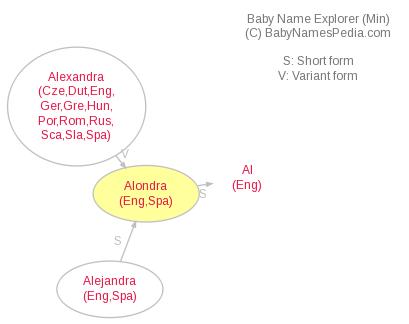